The Global Positioning System, better known as GPS, has come to affect countless aspects of our daily lives, from directing our holiday aeroplanes to enabling us to drive round an unfamiliar city without any map other than the one on our mobile phone.  At the risk of making myself sound like a scary stalker, I can check my wife’s whereabouts at any time using Find Friends on my iPhone.

There have been GPS satellites in position orbiting the Earth for many years, but only the US military had the equipment able to unscramble the signals and in the mid 1990’s even the lightest GPS receivers still weighed a pretty chunky 1.25 kg.  When President Clinton announced in 1996 that the system would be opened up for civilian use by the year 2000, few could have anticipated that this would kick start a massive industry and that by 2017 almost a third of the population of the world would have a GPS receiver in their pocket, on their smartphone, which together with a mapping application such a Google maps allows people to get around unfamiliar places without the fear of getting lost.  Today, Sat Nav devices using GPS signals come as standard in many new cars. 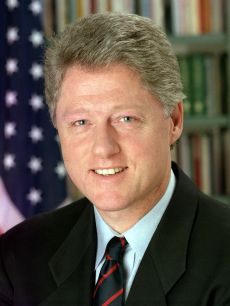 GPS is a network of satellites in orbit around the Earth. In total, since 1978, the US has launched a total of 72 GPS satellites. The satellites are in a region of space called Middle Earth Orbit, roughly half way between Low Earth Orbit satellites, such as the International Space Station, and the higher Geostationary orbits used by satellites which transmit TV signals. 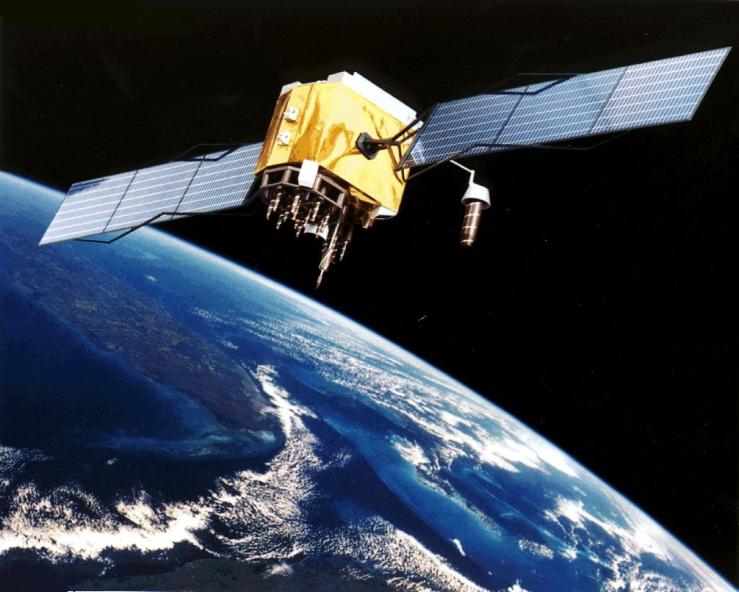 Since the first launch, there have been two launch failures and most of the earlier satellites launched before 1997 are no longer transmitting. So, the GPS system currently consists of 31 working satellites.  The satellites aren’t all in the same orbit, as to give full coverage of the Earth’s surface there are six separate orbits.  Each of these six orbits is at a height of 20,200 km above the Earth’s surface, but the orbits are at different angles to the equator, as shown in the diagram below .

As each satellite moves in its orbit, it will appear to an observer on the Earth to: rise, move slowly through the sky, and then set a few hours later. Because there are 31 satellites in total, from a given point on the Earth there will typically be 7 or 8 visible at a given time and, as I’ll explain later, you only need to get a good signal from four satellites to get an accurate position. 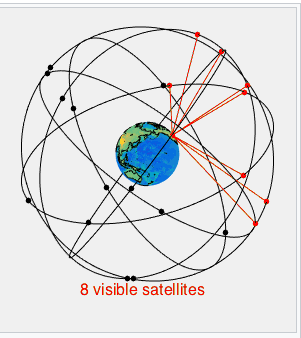 How does GPS work?

Each GPS satellite has a set of atomic clocks, accurate to a few billionths of a second per day. These clocks are kept in step with atomic clocks on the ground, so the clocks on the GPS satellites all show the same time. The satellites have a transmitter which sends a signal to Earth. The power of the signal is around 500 watts, which is roughly similar to the power radiated by the transmitter on a mobile phone mast (see note 1). There are three parts to the signal: the first part identifies which satellite is sending it, the second is a very accurate time signal, and the third part, known as almanac data, tells the GPS receiver the position of both itself and every other satellite. This enables the receiver to know exactly where the signal is coming from.

When a GPS receiver receives the signal it can compare the time at which it received the signal with the time at which it was transmitted and thus work out how long the signal has taken to travel.  The distance to the satellite can therefore be worked out as using the simple formula  distance = time x speed.  The speed of the radio waves measured here is the same as the speed of light, since radio-waves and light are both forms of electromagnetic radiation.  Therefore, if a GPS signal takes 0.1 seconds to reach us then the satellite must be 29,979.2458 km away, as the speed of light is 299,792.458 kilometres per second 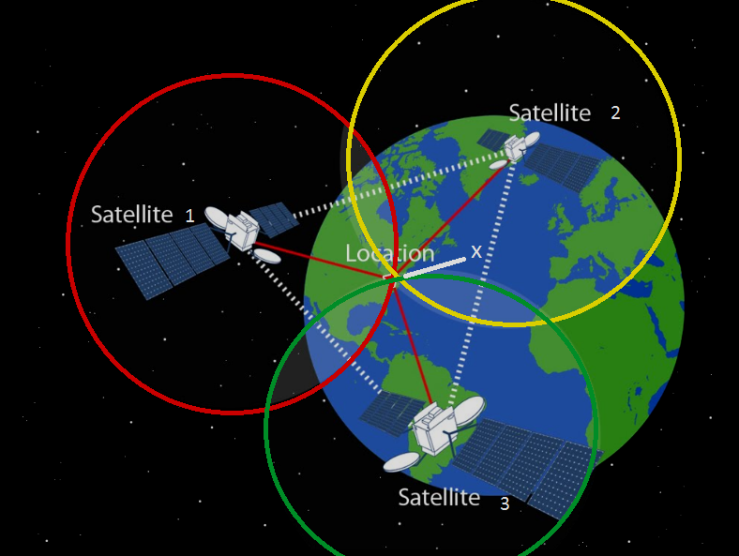 In fact it is a little bit more complicated than this because the GPS receiver does not have an accurate atomic clock so it cannot know the current time as accurately as the GPS satellites. The clock on the GPS receiver will almost certainly happen to be fast or slow by a small fraction of a second.  However, in order to get an accurate measure of the time taken for the signal to arrive, the clock on the GPS receiver must synchronise perfectly with the clocks on the GPS satellites. The way it gets around this is by using the time signal from a fourth satellite to work out the amount of time by the which the receiver is fast or slow. For those of my readers more mathematically inclined, I have put the details of how it does this in the notes at the bottom of this post

There are some limitations to the accuracy of position provided by GPS.  One is that the speed of radio waves is not constant, as conditions in a region of the upper atmosphere, known as the ionosphere, can cause them to slow down slightly. This makes the time taken for the signal to arrive at the receiver slightly longer, implying that a satellite is further away than it actually is. Another factor is that large objects such as trees between the receiver and the GPS satellite may weaken the signal or even block it altogether. 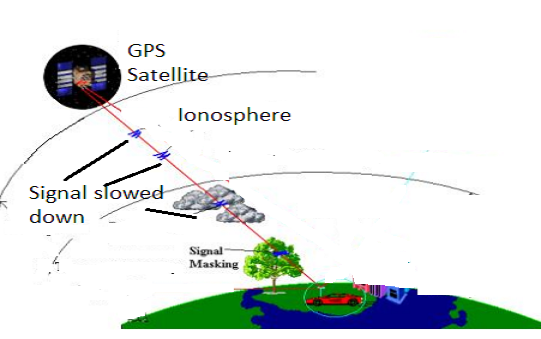 An additional false signal can also be generated when a GPS signal is reflected off tall buildings. This effect, which is known as multi-path error, is shown in the diagram below. The receiver receives two signals from the same satellite: a direct signal (the pink line) and a reflected signal (the yellow line). The two signals have travelled different distances, so the GPS receiver calculates two different distances to the same satellite. This can result in an incorrect distance if the wrong signal is chosen by the receiver. Alternatively, the two signals can interfere and cancel each other out so no signal is received. 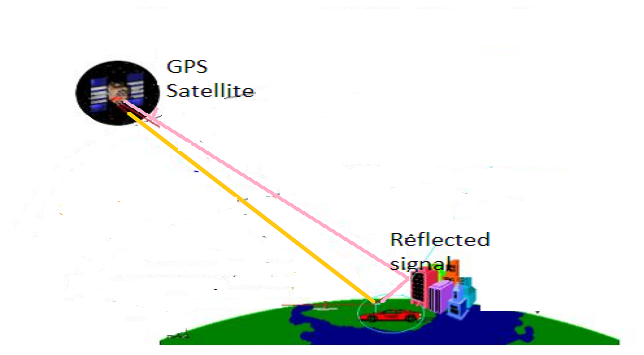 Errors could also be caused by slight inaccuracies in the atomic clocks on the satellites or by the satellite making an error when calculating its own exact position. Nevertheless, even taking all these factors into account, a GPS receiver should be able to work out its position to an accuracy of within 10 metres.  This, however, only applies to locations outdoors and above ground, as the signal cannot travel through large and complex buildings.

Given the current state of world politics, I wonder whether today’s US politicians would be so willing to make military technology available to the masses.

And finally.. the future of GPS

GPS satellites are managed by the US government. In order to make themselves independent of America other countries have introduced, or are planning to introduce, their own networks of navigation satellites. I will talk about this in my next post.

The receiver solves these equations simultaneously to determine x, y, z, and tc.