Now that we are in the month of March, for most of us in the northern hemisphere the worst of the winter is over, and it is only a few days until 21 March, the first day of spring.

There is a commonly held view that March 21 is the spring equinox and that the equinoxes are the two days in the year when all places on the Earth have exactly 12 hours of daylight and 12 hours of darkness. In fact, as I’ll explain later, this is only approximately correct. March 21 can sometimes be the date on which the spring equinox falls but the precise date varies from year to year and also depends upon where you are located.  In fact, at the equinoxes there is actually nowhere on the Earth where there are exactly 12 hours of daylight and 12 hours of darkness.

On what date do the equinoxes occur?

The tables below give the times of the two equinoxes from 2016 to 2021  for three Locations: London (Greenwich Mean Time or GMT), Honolulu (GMT -10 hours) and Tokyo (GMT +9 hours).  As you can see, the northern hemisphere spring equinox can occur on March 19, 20 or 21 and the autumn equinox on Sept 22 or 23. Over a longer time span there is an even greater range of dates (see notes).

The first point to consider is what to we mean by daylight? Do we consider twilight, the time just after sunrise or just before sunset when it is not completely dark, to be daylight? If we use the common definition of “hours of daylight”as being the interval between sunrise and sunset then there are actually slightly more than 12 hours of daylight at the equinox everywhere in the world. There are two reasons for this. First the definition of sunrise is actually the point at which the first light from the Sun’s rays reaches above the horizon,not when the centre of the Sun is above the horizon. The diagram below shows the path of the Sun’s disk at sunrise at the equinox in London. 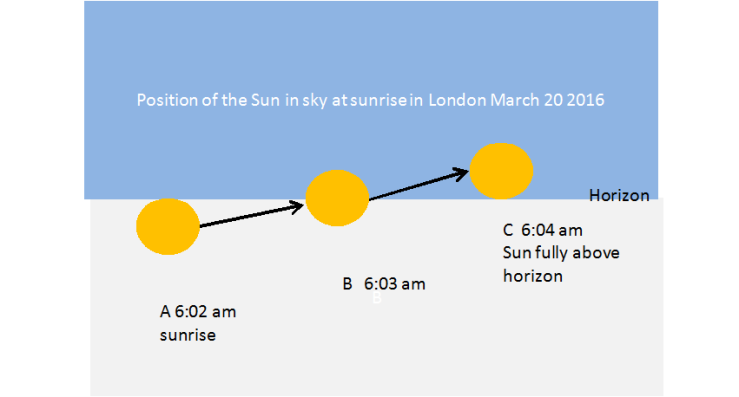 In addition, when the Sun is just below the horizon, the Earth’s atmosphere bends the Sun’s rays, causing it to appear just above the horizon. This bending of light is known as refraction and has the effect of slightly extending the hours of daylight. 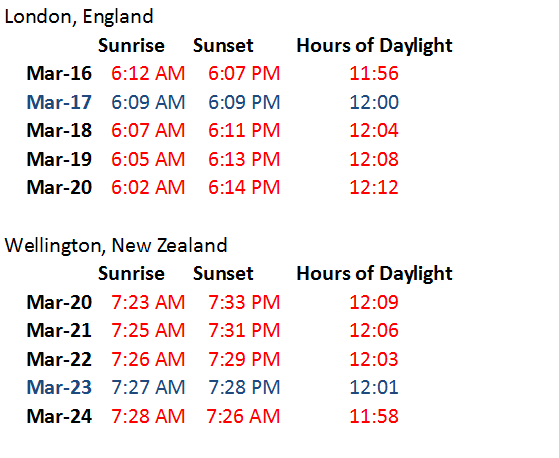 (1) The table shows that there is a pattern in that the times of the two equinoxes in a given year are just under six hours later than the previous year, unless the year is a leap year, in which case they are just under 18 hours earlier than the previous year.  Thus, the equinoxes will occur at roughly the same date and time every four years. For example the March equinox will occur at: