The is a now an expanded and updated version of this post available at:

The Expansion of the Universe

Astronomers have known since the late 1920’s that the Universe is expanding. By this we mean that distances between objects which are not bound together by another force, such as gravity, increase over time. 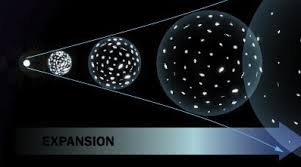 Diagram showing the expansion of a small region of the Universe

The most commonly held view before 1998 was that, although the Universe is expanding, its rate of expansion must be slowing down.  There was good reason for believing this, when astronomers applied Einstein’s theory of general relativity to the entire Universe, it predicted that gravity due to the matter in the Universe should slow down its expansion.

If the average density of matter in the Universe is greater than a certain value, known as the critical density, then its expansion will eventually stop altogether and it will start contracting, eventually ending in a big crunch in the far distant future.

At the Big Crunch the Universe ends in a singularity where space and time comes to an end – the reverse of the Big Bang.

Before the late 1990’s many cosmologists believed the Universe would end in a Big Crunch.

Measuring the rate of expansion of the Universe

When we look at the spectrum of any star, we see a number of dark or bright lines.  The dark lines are known as absorption lines and the bright lines emission lines. Each line is due to an energy transition in a particular type of atom or molecule and always occurs at the same wavelength. For example, the hydrogen alpha spectral line occurs at a wavelength of 656.3 nanometres. 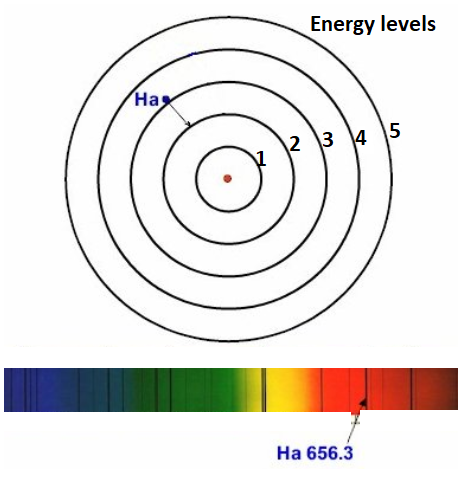 The Doppler shift is the fractional change in wavelength due to the motion of the light source and is often given the symbol z. 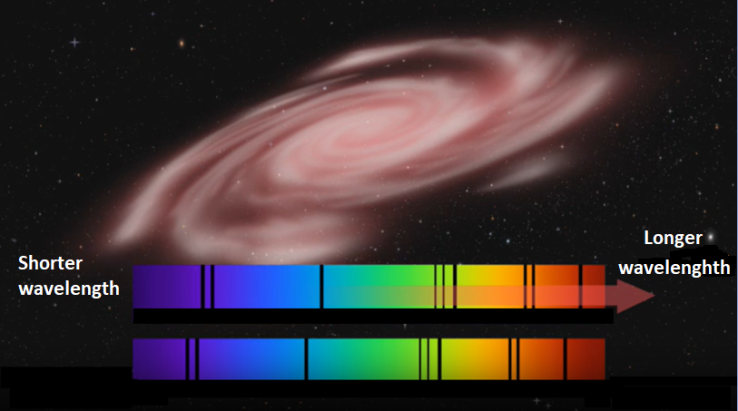 If the light source is moving at a small fraction of the speed of light, then the velocity (v) it is moving away from or towards us is given by:

Where c is speed of light.

If we measure the velocity that galaxies are moving with respect to us, calculated from the Doppler shift of their spectral lines, and plot it against their distance, then we get the relationship shown below. 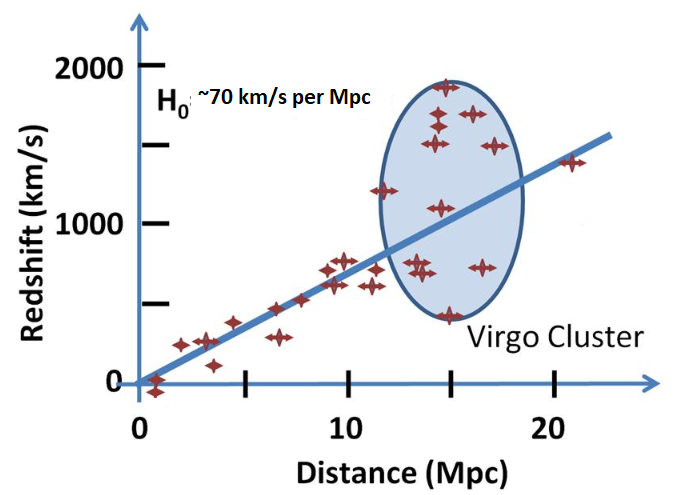 Note: Nearby galaxies in the Local Group which are gravitationally bound to the Milky Way have been excluded from the diagram.

As you can see all the galaxies are moving away from us, showing the Universe is expanding, and. there is a clear relationship between the recessional velocity and the distance of a galaxy. This relationship,  called Hubble’s Law named after the American astronomer Edwin Hubble (1889-1953) who discovered it in 1929, is:

In order to validate Hubble’s law, astronomers need to accurately measure the distance of objects far outside our own Milky Way galaxy.  This is done by using standard candles. These are objects which  have a well-defined absolute brightness and by measuring their apparent brightness we can determine how far away they are.  Some of the standard candles used by astronomers are given below.

Cepheid variables are bright enough to measure distances up to 25 Mpc.

A nova (plural novae) is a transient astronomical event that causes a sudden massive increase in the brightness of a relatively faint star to between 70,000 to 250,000 times the luminosity of the Sun. After the star hits its peak brightness it fades over several months. Studies of nearby novae have indicated that regardless of the peak luminosity achieved, after 15 days all novae have the same brightness – about 12,500 times that of the Sun. By measuring the apparent brightness of a novae in a galaxy after 15 days, it is possible to determine its distance.

Novae can be used to measure distances up to 20 Mpc

M80 – A large globular cluster in our own Milky Way galaxy.

Tully Fisher (TF) relations are relationships between the width of the spectral lines to the luminosity (or mass) of a spiral galaxy.

I will discuss TF relationships in a future post. 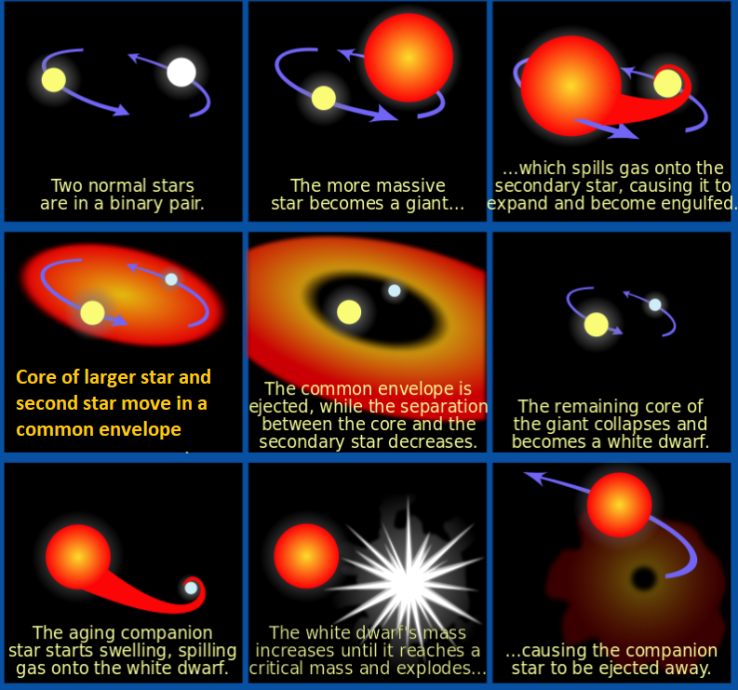 When a white dwarf approaches the Chandrasekar limit (1.44 solar masses) it can reach a point where runaway nuclear fusion occurs. This releases an enormous amount of energy in a short time, totally destroying the star and blasting a cloud of plasma into space. Because the detonation of the white dwarf occurs at a particular mass, all type 1a SN have a similar maximum brightness – about 5 billion times brighter than the Sun, although this varies a little

The American astronomer Philips in 1993 derived a formula to accurately estimate the maximum brightness of a Type 1a SN based upon the decline in apparent brightness 15 days after the peak. This allowed the use of Type 1a SN as accurate standard candles.

However, type 1a SN are rare events. On average one explodes in a galaxy the size of ours every 500 years. To be guaranteed a discovery on any given night requires searching hundreds of thousands of galaxies. Such wholesale searching has been made possible by the development of large area charge-coupled device (CCD) detectors and mosaics of CCDs used at the focuses of large telescopes

Between 1994 and 1998 twenty astronomers located in America, Europe, Australia and Chile looked at 16 high red shift supernovae. The survey went all the way up to z=0.9  (a recessional velocity of 56% of the speed of light) . They used the Philip’s relationship, talked about earlier, to estimate the absolute brightness of the type 1a SNs and knowing the absolute brightness calculated their distance from their apparent brightness. The results are given in a simplified form below, What is is clear is that the slope of the graph id very different that it would be if the expansion of the Universe is slowing down

From these observations the team made the following conclusions.

This was such an important finding that Brian Schmidt and Adam Reiss from the High z project together with Saul Perlmutter from the related supernova cosmology project won the Nobel Prize for physics in 2011, 13 years later. The 13-year delay is typical. Science Nobel prizes are normally awarded a significant time after a major discovery because the discovery has to be generally accepted and its overall importance assessed by the scientific community.

How much dark energy is there in the Universe?

Energy and mass are equivalent using Einstein’s famous equation E = mc2. So the amount of dark  energy is usually expressed as a matter density. To provide the measured acceleration the average density of dark energy in the Universe is only ~7 × 10−27 kg/m3 .  This is an extremely low value – equivalent to four atoms of hydrogen per cubic metre. However, because the Universe is mostly empty space it is still enough for dark energy to be its dominant constituent.

What is dark energy?

The simple answer is that we don’t know! I discussed this in  a previous  post An overview  of Dark energy  in which I mentioned that one explanation is something called the cosmological constant. This introduced by Einstein back in 1917 but later disregarded, but this is only a possible explanation and, at the moment, one of the greatest  mysteries of physics is:

What is most of the universe made up of?

25 thoughts on “The discovery of dark energy”