Sending Messages to be picked up by alien civilisations is called METI (Messaging to Extraterrestial Intelligence) and is an activity which has taken place with increasing frequency over the past few decades. Advocates of METI argue that in addition to searching for extraterrestrial signals we can increase our chances of making contact with aliens by sending messages to stars which have planets on which intelligent life may have evolved.  The alien life forms, if they receive our signal from Earth, should recognise it as a message from another civilisation and, in theory at least, be able to extract the information contained in the message.

One of the challenges of such a message is writing it in such a way that it could be understood by an alien civilisation receiving it. The recipients would have no knowledge of Earth or of any of its culture and would in it all likelihood look and act very different from human beings.

The difficulties faced when trying to decipher a message in an unknown language are illustrated by the hundreds of stone tablets on the Greek island of Crete written in a language which archaeologists call Linear A. All these tablets were produced around 3,500 to 4,500 years ago (roughly the time of ancient Egyptian civilisation) but nobody has managed to decipher them. Most of the letters in the Linear A alphabet appear in no other known language. Huge efforts have been made over the years to decipher the Linear A, but to no avail.  What is needed is a clue like the Rosetta Stone, which contains the same text in three different languages and its discovery provided the key to finally understanding Egyptian hieroglyphics. 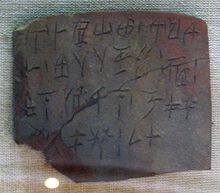 Frank Drake and The Arecibo Message

The first and the most famous message sent from Earth intended for alien civilisations was the Arecibo Message. This message was constructed by Frank Drake(1930-) who, as mentioned in my previous posts, was one of the pioneers of the search for extraterrestrial intelligence.

Drake decided to convey basic information about humanity by sending a simple picture which someone receiving the message could easily construct. The message was transmitted from the Arecibo telescope at a wavelength of 12.6 cm and consisted of a sequence of 1,679 zeros and ones (see the notes at the end of this post). The number 1679 was chosen because its only factors (numbers which divide into it without giving a remainder) are 23 and 73. Drake felt that when the message was interpreted by an alien civilisation they would naturally write out the message in a 23 by 73 or a 73 by 23 grid.

The message consists of seven separate components. This is shown more clearly if we colour code the different parts of the message as shown below.

The Arecibo Message colour-coded -Image from Wikimedia Commons. The message is written out in a grid of 73 rows and 23 columns, which is the way it was intended to be read.

The message was transmitted on 16 November 1974 and  was aimed a globular cluster, a dense collection of stars, about 25,000 light years away. It was sent a total of three times. It will take about 25,000 years to reach the position where its target was in 1974, by which time the original target will have moved, although, in theory, it could be intercepted by any alien civilisation along the way.

In addition to the Arecibo message there have been a number of other attempts to send messages to extraterrestrial civilisations. Perhaps the most famous was the “A Message from Earth” transmission. This was sent in October 2008 towards Gliese 581c, an  Earth-like planet which orbits the star Gliese 581, and is  about 20 light years from Earth. The message is a digital time capsule containing 501 different messages that were selected through a competition on the social networking site Bebo. It contained a variety of information, such as details about the contributors’ own lives and ambitions and images of famous landmarks and famous people – for more information click here.

I think that if an alien civilisation on Gliese 581c were to receive this message they would find it impossible to decipher.  For one thing, most of the text messages are in English!

However Seth Shostak, an astronomer who has long been involved in SETI, believes that whether or not aliens who might receive the messages would understand them is beside the point. They would at least recognise that there was some sort of message coming from Earth. In 2008 he told the BBC:

“The point might simply be: well, here we are; we’re clever enough to build a radio transmitter”.

As yet although numerous message have been sent from Earth we have not received a reply. This might be expected given the vast distances involved. For example, if  “A Message from Earth” reaches its target, and the alien civilisation decides to reply by sending a message back to Earth we will not hear anything before the year 2049.

Another very interesting point to make is that it may not be a good idea to draw the attention of a very advanced civilisation to ourselves. Indeed in a 2010 documentary the British theoretical physicist Stephen Hawking said:

“We only have to look at ourselves to see how intelligent life might develop into something we wouldn’t want to meet,” …. “I imagine they might exist in massive ships … having used up all the resources from their home planet. Such advanced aliens would perhaps become nomads, looking to conquer and colonize whatever planets they can reach.”

He went on to say that a visit by extraterrestrials to Earth might well be like Christopher Columbus arriving in the Americas, “which didn’t turn out very well for the Native Americans.” 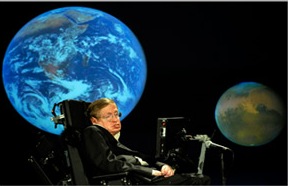 Opinion vary widely about how widespread intelligent life is. My view, as outlined in my previous posts, is that we won’t ever hear any replies from any of these messages. I am convinced  by the argument that although life may be common in our galaxy, intelligent life leading to advanced civilisations are very rare and we are very likely to be the only such civilisation in our galaxy.

I hope you have enjoyed reading this. My next post which will be the final one on communicating with extraterrestials will be about the messages sent on five spacecraft which are currently in space and are due to escape from the Solar System into interstellar space over the next few decades.

1) Content of the Arecibo Message in zeros and ones

2) How to read the numbers in the message

The first four rows show the numbers from 1 to 10  in binary format. The fourth row marks the beginning of each number and is to be ignored.  The first, second and third rows give the value of the number as shown in the table below.

4 thoughts on “This is Earth Calling”