This post, which is the latest in my series on cosmology, is about the ultimate fate of the Universe, a subject which has engaged scientists, philosophers and religious leaders for centuries. There are many possible endings to the Universe, but the outline I will present here, which is sometimes called “The Big Freeze”, is the most commonly held view based upon the known laws of science.

4 billion years in the future – Milky Way and Andromeda merge

As readers of my previous posts will recall, the Sun is one of around 400 billion stars in the Milky Way galaxy and the Milky Way is one of over 200 billion galaxies in the observable Universe (ref 1). Our galaxy, together with the large spiral galaxy in the constellation Andromeda and around 50 smaller galaxies form a collection of galaxies called the the Local Group.

As readers of my previous post The Universe Past, Present and Future will recall, the Universe is expanding and, in general, the further away a galaxy is from us the faster it appears to be moving away from us. This does not apply to the galaxies in the Local Group. In fact, the Andromeda galaxy is moving towards the Milky Way at about 400,000 km/h and the Milky Way and Andromeda are expected to collide in about 4 billion years time. When this happens, a large new single galaxy will be formed.  The new galaxy which will be formed by the merger is sometimes called Milkomeda (ref 2) and, over billions of years, it will gradually absorb the other Local Group members. 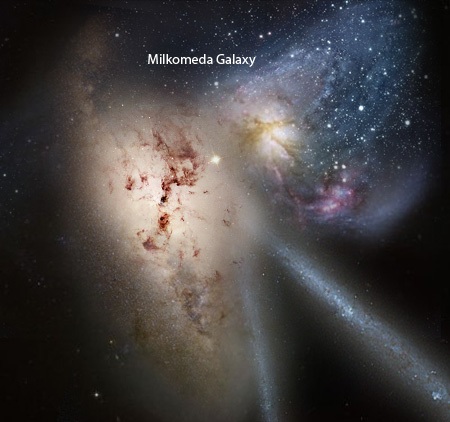 Outside the Local Group the expansion of the Universe will continue. As discussed in a previous post, this will be driven by dark energy. The  speed that a galaxy is moving away from us depends upon its distance. As a galaxy moves a greater distance away from us, then the speed at which it moves increases. When it moves so far away that it is travelling faster than the speed of light we can no longer see it. This is shown in the table below. 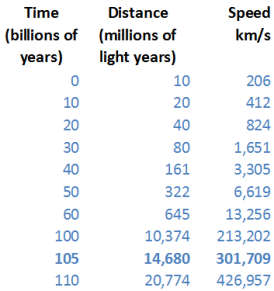 This table shows how the distance of  a nearby galaxy which is now 10 million light years away from us (about four times the current distance of Andromeda and thus well beyond the Local Group) increases with time. The last column shows how fast this galaxy is moving in units of kilometres per second. 1 kilometre per second is 3,600 km/h.

In about 105 billion years time, this galaxy would have moved out to a distance of 14.7 billion light years and would be moving away from us at a speed 301,700 km/s, which is more than 1 billion km/h. However, the speed of light is around 300,000 km/s and, because this galaxy would be moving faster than the speed of light, its light would not be able to reach us and it would no longer be visible. See Note 1. In fact, in 120 billion years time, all galaxies outside the Local Group will have moved so far away that the light from them will be unable to reach us. 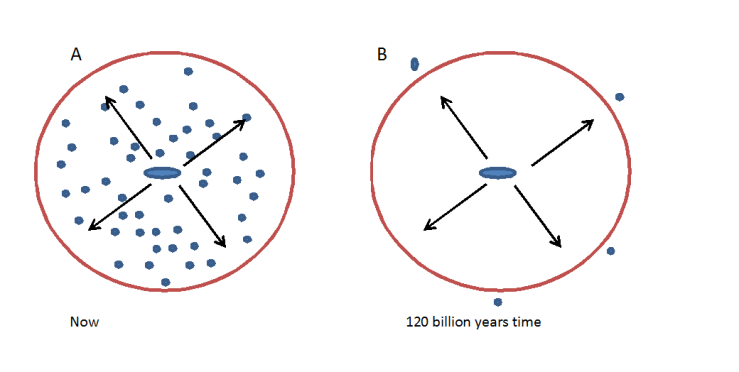 In the diagram above, the furthest distance than a galaxy can be away from us but still remain observable (in principle) is marked with the red circle.

As described in a previous post, stars consume hydrogen to produce helium and later on towards the end of their lives they make heavier elements. New stars are being created all the time from clouds of gas and dust. Many of the beautiful glowing nebulae seen through telescopes consist of glowing gas and dust clouds lit up by newly formed stars. 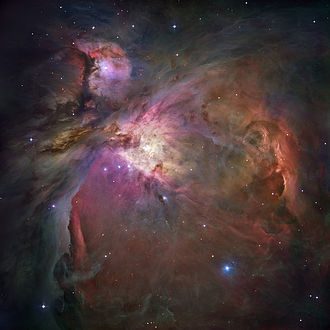 The Orion Nebula, a region of star formation

However the supply of hydrogen is finite and in about 1 trillion years time there won’t be enough hydrogen left to forms any more new stars (Ref 3). In about 10 trillion years the longest lived stars which are small faint stars called red dwarfs will have come to the end of their lives.  All stars which started life with an original mass less than 10 times the mass of the Sun, which is over 97 % of all stars, will have become very dense cold objects called black dwarfs. Very massive stars more than 10 times the mass of the Sun will have become neutron stars or black holes: 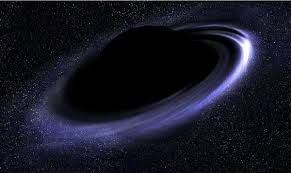 None of these object emits any light so the observable Universe in 10 trillion years will be very dark and very cold, having a temperature a fraction above the lowest possible temperature which physicists call absolute zero. It will consist of black dwarfs, neutron stars and black holes, planets and other smaller bodies associated with them. At the centre of Milkomeda will be a large black hole many millions times the mass of the Sun.

(1 quintillion is a million trillion or 1,000,000,000,000,000,000.)
Milkomeda will consist of  objects which are all in motion with respect to each other. Occasionally these objects will get close enough to each other so that their trajectories change slightly. When this happens the speed of one object may speed up and the other may slow down. This is essentially the same effect that spacecraft which visit the outer planets use.  The Voyager space probes, for example, took energy from Jupiter’s orbit to slingshot them into the outer solar system and beyond.

After a number of such collisions an object may get enough energy to escape from Milkomeda. Over a vast period of time, around 100 quintillion years, this will cause the galaxy to gradually shrink as dead stars and possibly their attached planets escape, and the remaining objects would be more tightly bound.

100,000-1,000,000 quintillion years in the future -Gravitational radiation causes objects to fall into a massive black hole

In 1916 Albert Einstein predicted the existence of gravitational waves. One object orbiting another will emit something called “gravitational radiation” causing it to lose energy and spiral slowly inwards towards the more massive object. It is generally accepted by astrophysicists that gravitational waves do exist, although they are incredibly difficult to detect and, despite astronomers looking for them for decades, they have never been observed. 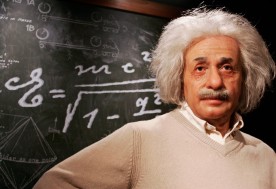 Assuming Einstein’s theory is correct, then also assuming that the Earth has survived the Sun’s red giant phase (which is unlikely) and that it not been detached from the Solar System by a near collision with a passing star (which almost certainly will happen if we wait long enough), in 100,000 quintillion years time it will spiral down to the surface of the Sun (see note 2). It also means that, over an even longer timescale of about 1,000,000 quintillion years, the eventual fate of all the massive objects which have not escaped from the galaxy is to fall into the super massive black hole which lies at its centre.

In my next post in this series I will talk about even longer timescales. What will eventually happen to the black hole at the centre of Milkomeda?  And what is the eventual fate of the objects which have not fallen into this super massive black hole?

This post is the sixth in my series about cosmology. The other posts in this series are:

(1) The Universe Past, Present and Future. This describes what is meant by the Universe and gives an overview of its origins, evidence for its expansion and discusses briefly its ultimate fate. To view this post click here.

(3) Dark Energy. This post gives the reasons why cosmologist believe dark energy exists and why it makes up nearly 70% of the mass of the Universe. To view this post click here.

(4) Dark Energy over Time. This post  discusses how the amount of dark energy in the Universe has varied over time and its implications on its future evolution. To view this post click here.

(5) Dark Matter. This post discusses evidence for dark matter, the mysterious substance which makes up around 25% of the mass of the Universe. To view this post click here.

1 This distances in this table should be considered as approximate only and it assumes that the rate of expansion of the universe will not vary with time in the future, which may not be the case.

16 thoughts on “Ultimate Fate of the Universe”