This year, for the majority of Christians, 27 March will be Easter Sunday, one of the most of the most important dates in the Christian calendar.

Although Easter is a is a festival celebrating the resurrection of Jesus Christ from the dead, it is also widely marked by non-Christians in the UK, particularly as there are two very welcome public holidays on the preceding Friday, known as Good Friday, and the following Monday. In the UK, as in many other countries, chocolate Easter Eggs and Easter Bunnies are bought by much of the population regardless of their religious beliefs.

Pancakes eaten with lemon and sugar on Shrove Tuesday.

How is the date of Easter calculated?

Early Christian decision makers in the fourth century established that Easter would be held on the first Sunday after the first full moon occurring on or after the (northern Hemisphere) spring equinox (which is assumed to always take place on March 21) and this definition still holds true today.

There are two interesting features to this definition. The first one is that as discussed in my previous post the exact date of the spring equinox isn’t always March 21. It varies from year to year and also from place to place on the Earth.

Over what date ranges can Easter occur?

If we apply these rules then Easter can fall on any date between March 22 and April 25, a total of 35 possible dates.

The table below lists all the dates on which Easter has fallen, or will fall on, from the years 1900 to 2199. 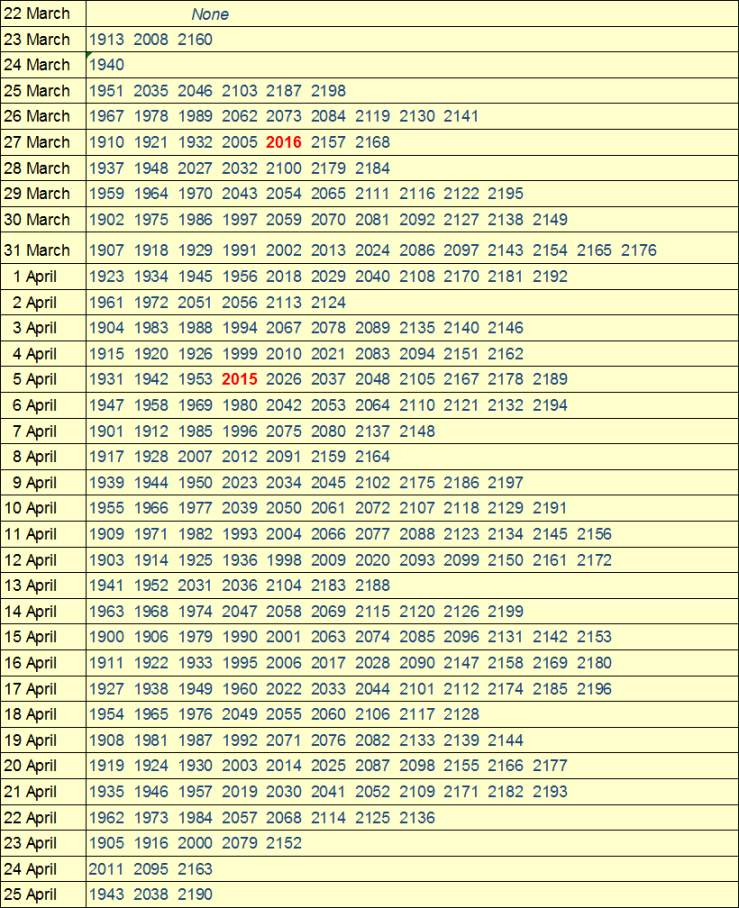 As you can see from the table above, there are actually no years in this date range on which Easter will fall on the earliest possible date, March 22. This won’t happen until the year 2285.

Problems with a varying date of Easter

The main problem caused by the date of Easter varying from year to year is that it can cause difficulties of co-ordination with the civil calendar. For example, in the UK schools normally have a two week break around Easter. If Easter falls very early or very late in a particular year this can cause the lengths of the school terms to be unbalanced. This year because Easters falls early many  schools  will close for four days over the long Easter weekend and have their two week Spring holiday in early April.

Reform of the date of Easter

To address the practical problems of Easter varying over a wide range of dates,  there have been attempts to redefine the date of the Easter so that it only occurs over a narrow range. Nearly 90 years ago in the UK the Easter Act 1928 was passed. This legislation sets the date of Easter to be the first Sunday after the second Saturday in April. If this legislation were in force it would mean that Easter would always fall within the date ranges April 9 to April 15. Although this act remains on the statute book no UK government has ever tried to implement it (The Guardian 2011).

As mentioned in my earlier post Christmas Day and the Calendar, most Orthodox churches still use the Julian Calendar and will not accept a calendar which they see as being imposed by the Catholic Church. The Julian Calendar lags 13 days behind the Gregorian Calendar, the civil calendar used by almost every country in the world.

The Orthodox Church uses the same rule that Easter takes place on the first Sunday after the first ecclesiastical full moon occurring on or after March 21. However, they use March 21 in the Julian Calendar which is equivalent to April 3 in the Gregorian calendar. This, coupled with the fact that the Orthodox churches use a slightly different way of calculating the ecclesiastical full moon, means that, in most years, the Orthodox churches celebrate their Easter on a later date than the other Christian churches. In 2015 they celebrated their Easter on April 12 and this year it will be on May 1. 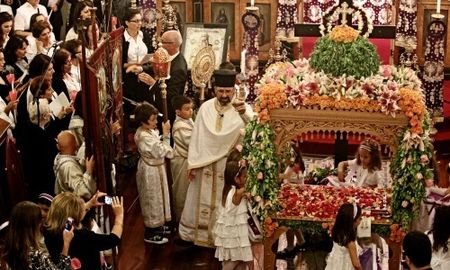 I hope you have enjoyed this post and I wish you all a happy Easter break.