On New Year’s Eve an extra second will be added to the end of the day. This extra second is called a leap second. As I’ll explain later, leap seconds need to be added periodically to bring the time we measure with accurate atomic clocks in line with the natural time which results from the rotation of the Earth. 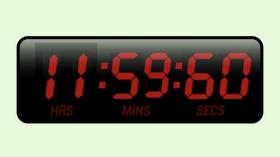 Why do we need leap seconds?

Although we take the average length of a day to be 24 hours, the mean solar day, or average “natural” day measured by the Earth’s rotation, is now slightly longer than this. As discussed in a previous post, this is due to the slowing down of the Earth’s rotation (see note 1).  In the year 1900 a day was almost exactly 24 hours, but it is now around 24 hours 0.001 seconds. So, to bring the time measured by accurate atomic clocks to within a second of the natural time, a leap second needs to be added approximately every 1,000 days. The extra second is always added at the end of the day on 30 June or 31 December. The previous two were added on 30 June 2012 and on 30 June 2015.

It has been possible for around two hundred years to accurately measure the rotation of the Earth, and it is now clear that it is slowing down, which means that the length of the mean solar day is increasing. However, over shorter time-scales things aren’t quite as simple as this. The actual speed of the Earth’s rotation is variable and events such as

may temporarily speed it up. So although the trend over decades and centuries is that the days are getting longer, over shorter time-scales the average length of a natural day may actually decrease. This is illustrated in the diagram below which shows, in milliseconds, the amount by which the average length of a day was longer than 24 hours for the years 2000 to 2014. (1 millisecond equals one thousandth of a second.)

This variation means that, unlike leap years, where there are precise rules for determining whether or not a given year will be a leap year, it is not possible to say years in advance when there will be a leap second. A body called the International Earth Rotation and Reference Systems Service (www.iers.org) decides from accurate measurements of the Earth’s rotation when the next leap second will occur.

This announcement is made around six months in advance. For example, the official announcement of the December 31 leap second was made on 6 July 2016 by the following bulletin. 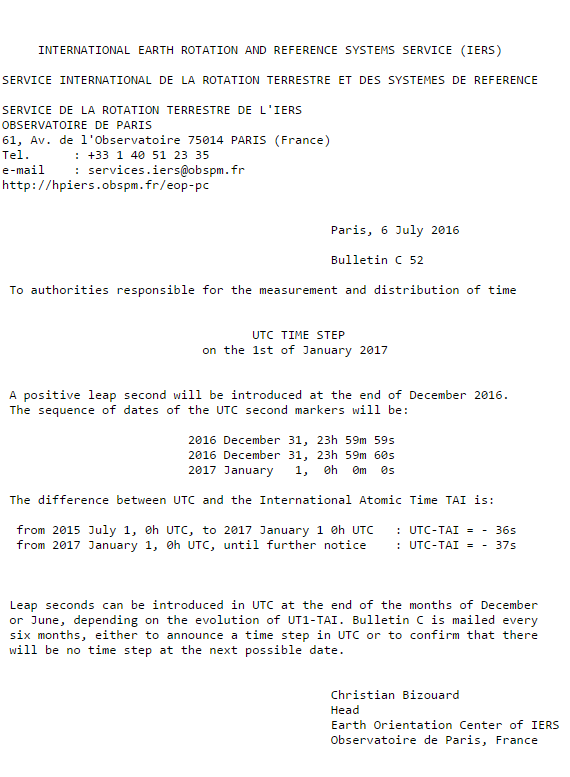 In the past when leap seconds have been applied, a number of data centres and websites around the world experienced system problems and crashed. This was because they could not cope with a minute which contains 61 seconds and interpreted this unforeseen event as a system failure.

For the next leap second Google are using an interesting solution to the problem. (Google 2016) For the 20 hour period from 2 pm on 31 December to 10 am on 1 January Google will abolish the normal rules of timekeeping.  Instead of normal seconds, they will be using a “Google Second” which is fractionally longer than the usual second. Instead of adding an extra second just before midnight, they are spreading out that extra second throughout this 20 hour period which means that no extra second will be need to be inserted.  This is shown in the diagram below:

What will happen in the longer term?

When will the leap second be added?

1)The average length of day when calculated over a entire year is just over 24 hours. However, over the course of a year the the actual length of a solar day varies. This variation throughout the year is due to entirely different effects than the slowing of the Earth’s rotation. It is at its longest – 24 hours and 30 seconds – around Christmas day and it is shortest at around 23 hours 59 minutes and 38 seconds in mid September. This is variation is described in more detail in my post  September 18 the shortest day.

2) The term Greenwich Mean Time is no longer used by astronomers.    Instead, they use two different times which agree with each other to within 1 second.

In common use, Greenwich Mean Time (GMT) is often taken to be the  same as UTC, which is the approach I have taken for this post. However, it can also be taken to mean UT1. Owing to the ambiguity of whether UTC or UT1 is meant, and because timekeeping laws usually refer to UTC, GMT is normally avoided in precise writing. 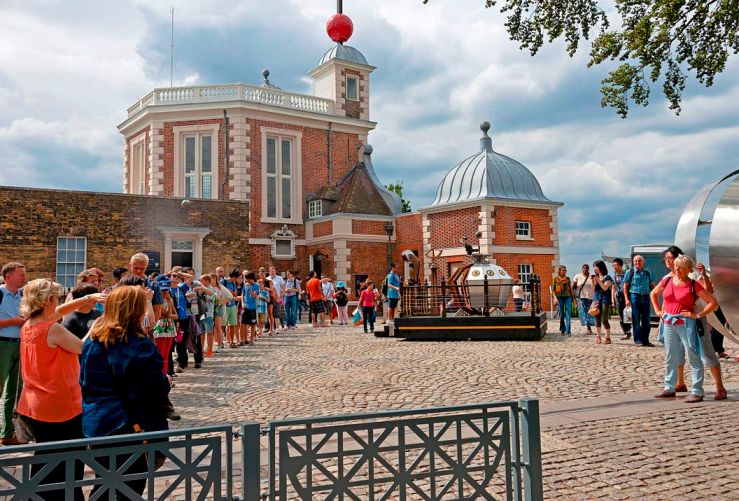