Around 200 million Americans live within a day’s drive of the total eclipse path, the narrow band of territory from Oregon to South Carolina.  According to an article in The Atlantic, up to 7 million people, perhaps even people reading this, will travel to see Monday’s total eclipse. They will join the 12 million who are lucky enough to see the total eclipse without needing to travel.  If 7 million people do travel then it will be the biggest movement of people in human history to see a natural phenomenon.  Even if the fear of being stuck in a traffic jam for many hours puts people off and a lower number of people actually make the journey, the growth of social media means that the number of people following the eclipse on-line in real time will be unprecedented.

Headline from the Atlantic

To mark this event I’ve decided to publish an updated version of my eclipse post from July 9.

As nearly all of my readers, particular those who live in the US, will know, there will be a solar eclipse on 21 August. For lucky viewers in a narrow band of territory running West to East across the US, it will be visible as a total eclipse – when the Moon completely obscures the Sun and it suddenly goes dark for a short period of time.

Although there is, on average, a total eclipse somewhere on Earth every 18 months, for each eclipse the region of on the world where a total eclipse can be seen is relatively small. Unless you are a so-called eclipse chaser – people who travel long distance to see solar eclipses, you will probably only get a change to see a total eclipse within 1000 km of where you live once or twice in your lifetime.  The last time that one has been visible anywhere in the contiguous US was back in February 1979, when most people currently alive weren’t even born (see note 1). 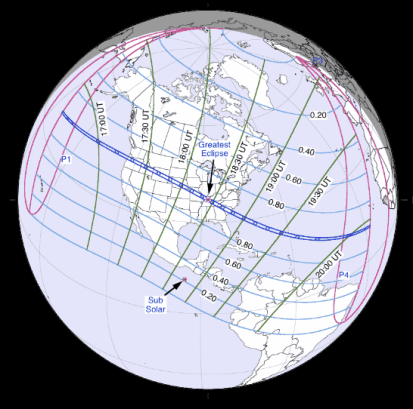 The path of totality, where a total eclipse can be seen is shown as the blue band in the map below. Places either side of the blue band will only see a partial eclipse, when the Sun is only partially obscured and the further away from it you are, the smaller the fraction of the Sun that will be covered. Unfortunately for people like me who live in the UK the eclipse will be barely noticeable, only a small fraction of the Sun will be obscured, just before sunset.

The path of the eclipse as it moves across the US is shown below. If you click on the diagram it will show the map in greater detail. The total eclipse will begin over the Pacific Ocean and will reach the Pacific coast of America in Oregon just West of the state capital Salem (shown below) at 10:16 am local time. 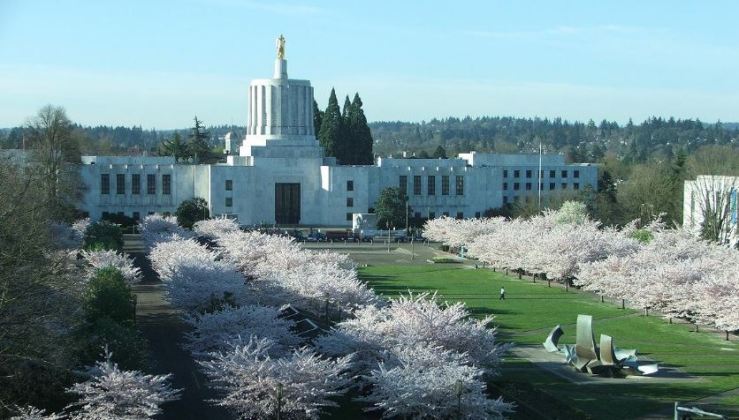 The table below shows the eclipse times from some selected cities in its path.

Why do we have eclipses?

It is common knowledge that solar eclipses occur when the Moon passes in front of the Sun, obscuring some or all of its light. This is shown in the diagram below, although the distances and sizes of the Earth, Moon and Sun aren’t to scale.

In the diagram above, the regions labelled A see a partial eclipse. Only in the small region labelled B does the Moon fully obscure the Sun and a total eclipse is seen.

From the diagram above you would expect the Moon to pass in front of the Sun every month and there to be an eclipse every month. This is clearly not the case.

The Moon’s obit around the Earth is actually tilted at about five degrees with respect to the Earth’s orbit around the Sun, as shown in the diagram below.

This means that during most lunar months the Moon will pass just below or just above the Sun rather than obscuring it. There are only two time windows in a year when it is possible for a solar eclipse to occur (see note 2). It also only possible for a lunar eclipse, when the Earth blocks sunlight hitting the Moon, to occur in the same time window.

The other reason why we can have eclipses is that, although the Moon is much smaller than the Sun – roughly 400 times less in diameter, by a strange coincidence it is also roughly 400 times closer to the Earth than the Sun. This means that, when viewed from the Earth, the Sun and the Moon appear to be almost exactly the same size. If the Moon were closer to the Earth, or larger in size, then solar eclipses would be more frequent and would last longer. If the Moon were further away, or smaller, then we would only have what is called an annular eclipse where the disc of the Moon is too small to fully cover the Sun.

The Moon, rather than moving in a circular orbit, moves in an elliptical (oval-shaped) orbit around the Earth. This means that its apparent size as seen from Earth varies. It appears largest when it is closest to the Earth and smallest when it is furthest away. The apparent sizes of large objects in the sky are measured in degrees. 1 degree is roughly how big a British 1 pence or US 1 cent coin would appear to be if you held it up at a distance of approximately 1.2 metres (4 feet) away from your eye. When it is at its closest, the Moon is 0.558 degrees in diameter and at its furthest away it is 0.491 degrees in diameter.

This variation means that there are times when the Moon lies directly in front of Sun, but, because it appears to be slightly smaller, we only see an annular eclipse. 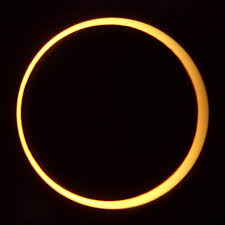 An annular eclipse- image from NASA

How long can a total eclipse last?

The maximum time that anyone will see a total eclipse on 21 August 2017 is just over 2 and half minutes.  The are a number of factors leading to a longer eclipse. The main ones are

Another less important factor is that the eclipse should occur at a point on the Earth when the Sun and the Moon are directly overhead. This gives an additional but very small boost to the apparent size of the Moon relative to the Sun.

This diagram, which is greatly exaggerated, shows that when the Moon is directly overhead (A) it  is very slightly closer to the Earth then when it is at the horizon (B). This causes the moon to appear to be slightly (1.8%) larger in diameter.

All of these conditions will be achieved for an eclipse which is predicted in South America near the equator on 16 July 2186 and will be 7 and half minutes at its greatest duration (Espinak and Meeus 2011).  I will not be around to see it, and neither will you!

(2) The two times in a year when a total eclipse can occur aren’t the same every year but change from year to year. This is due to an astronomical effect called precession of the line of nodes.