20 July 2019 is the fiftieth anniversary of the first manned landing on the Moon. 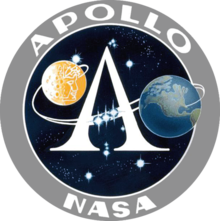 On 21 May 1961 President John F Kennedy made the following address to the United States Congress:

‘I believe that this nation should commit itself to achieving the goal, before this decade is out, of landing a man on the Moon and returning him safely to the Earth. No single space project in this period will be more impressive to mankind, or more important in the long-range exploration of space; and none will be so difficult or expensive to accomplish.’

At the time, which was in the middle of the cold war between the West and the Soviet bloc, the Soviet Union had a clear lead in space exploration and had achieved three notable firsts:

By achieving the goal of landing a person on the moon, which was incredibly ambitious given that in May 1961 America had not even put a human into orbit, the United States would show to the whole world that it had gained supremacy over the Soviet Union in space exploration.

The Moon is our nearest neighbour in space, and Kennedy was advised that, given sufficient investment by the richest country in the world, a manned landing could be be achieved before 1970. There was also a good chance that, given the amount of resources needed to develop and test the new technologies needed, the Soviets would not be able to do it by this date.  The Soviet Union simply could not afford to spend so much money in such a short time.

To achieve Kennedy’s goal, the American government funded the largest commitment every undertaken by a nation in peacetime. At its peak the programme employed nearly half a million people and its total cost (in 2019 dollars) was around $200 billion.

All this effort came to successful fruition on July 20 1969, when Neil Armstrong and Buzz Aldrin became the first men to land on the moon. When Armstrong stepped out of the spacecraft he said the immortal words:

That’s one small step for man, one giant leap for mankind.

The event was shown on live TV to a worldwide audience of over 1 billion, almost a third of the population of the Earth at that time.  As a very young child I was one of those billion people

Apollo 11 Astronaut Buzz Aldrin on the Moon -Image from NASA

The astronauts planted the United States flag on the lunar surface in view of the TV camera. Some time later, President Richard Nixon spoke to them through a telephone-radio transmission which Nixon called ‘the most historic phone call ever made from the White House.’

In total the astronauts spent  two and half hours on the lunar surface, during which time they gathered around 25 kg of moon rock. These samples were studied by scientists over the forthcoming years and  provided new insights into the origin of the Moon.

They left behind on the Moon’s surface scientific instruments that included an array of mirrors  used to calculate the distance between the Moon and the Earth, and a seismometer used to measure moon quakes.

On their return to Earth, the astronauts were treated as heroes – but they also had to spend three weeks in quarantine, just in case they had picked up any strange and potentially dangerous diseases on in the Moon. 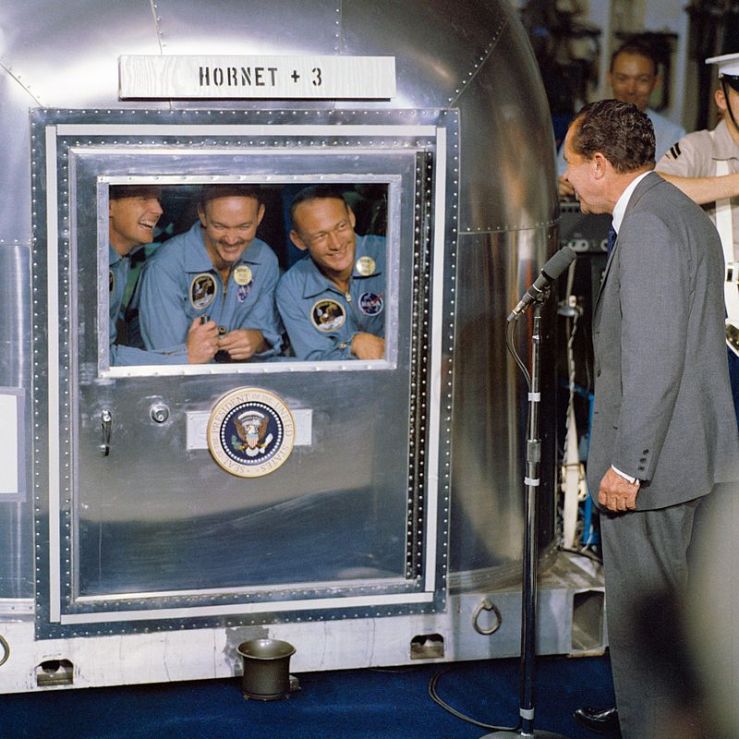 After they had emerged from quarantine they went on a world tour in September and October 1969, and met many prominent leaders, such as Queen Elizabeth II.

After Apollo 11 there were five further successful missions to the Moon (Apollos 12,14, 15, 16 and 17) plus one unsuccessful mission Apollo 13, which you may well know about from the Hollywood movie of the same name. The diagram below shows all the Apollo landing sites.

All the landings were on the near side, as it would have been far too risky to land on the far side of the Moon, where they would have been out of direct contact from the Earth.

As the missions progressed the astronauts spent  longer on the Moon.  For the final mission, Apollo 17, the astronauts stayed on its surface for three days and performed three separate moonwalks.

During the final three missions (Apollo 15, 16 and 17)  the astronauts used an electric-powered moon buggy to allow them to travel longer distances – up to twenty miles away from the lunar module – and thus gather rock samples from more varied sites.

The Lunar Rover or “Moon Buggy” – Image from NASA

The End of the Apollo Program

After the successful landing of Apollo 11, watched by such a huge proportion of Earth’s inhabitants, public interest in the Moon program started to wane and the US government  quickly came under pressure to reduce the spending on manned space exploration. The last three Apollo missions which should have taken place in 1973 and 1974 were cancelled.

Another victim of the spending cuts was the Moon base, which NASA had been hoping to build on the Moon in around 1980. This Moon base would gradually be extended, over the following years and decades, until it became a fully fledged lunar colony. The intention was that one day people would actually live on the Moon, but these plans were brought to a halt in the early 1970s, purely because of the cost.  Not only that, but for the last 47 years no astronaut has ventured more than a few hundred miles above the surface of the Earth.

Artist’s impression of a moon base -Image from NASA

When will humans return to the Moon ?

In March 2019, Vice President Mike Pence made a stunning announcement

‘At the direction of the President of the United States, it is the stated policy of this administration and the United States of America to return American astronauts to the moon within the next five years,’

…To be clear: the first woman and the next man on the moon will both be American astronauts, launched by American rockets from American soil.’

This seems an extremely ambitious target, as at that point they had not yet even selected the contractors, let alone begun designing and building the spacecraft to land on the Moon. It will be interesting to see how the next American manned programme to the Moon (called Artemis) pans out over the next five years and whether they can meet the 2024 deadline.