For those of us in the Northern Hemisphere we are at the time of year when there is the most daylight. In this post I’ll talk about the long long summer evenings: not only does the Sun set later at this time of year but the amount of twilight, when the Sun has set but it is not fully dark, is greatest.

As discussed in a previous post twilight is the period of time in the evening or early morning when, although the Sun is below the horizon because it has set or not yet risen, its rays can still hit the upper atmosphere causing the sky to glow faintly, so it isn’t completely dark. Twilight is divided into three stages: civil twilight, nautical twilight and astronomical twilight

How quickly it gets dark at different times of year

The four solid lines in the diagram below shows how the elevation of the Sun, measured in degrees, changes during the afternoon and evening in Manchester, England, which has a latitude of 53.5 degrees north, on different dates in the year. 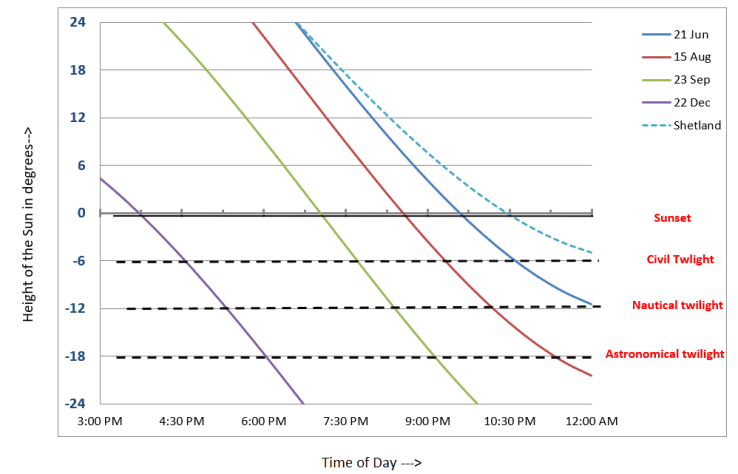 In Manchester, like many places in the world, we put our clocks forward in the summer months. This means the Sun is not at its lowest elevation at midnight. On the night of 21/22 June the Sun reaches its lowest elevation in the sky at 1:10 AM (and at its highest point in the sky at 1:10 pm not 12-noon). In Manchester astronomical twilight occurred for two hours on the night of 21/22 June 2019  between the hours of 0:10 am and 2:10 am, which is why it is not shown on the graph above

In Manchester, at the summer solstice, the Sun rises at 4:39 am in the north east. It ascends in the sky to reach a maximum elevation of 60 degrees at midday. It then descends, setting in the north west at 9:41 pm. As it sets it is moving at a shallower angle to the horizon and thus decreasing in elevation more slowly compared to other times of year.  It is this which causes the lengthy  twilight around the time of the June solstice..

Some actual values for these four dates are shown in the table below.

As you can see, in Manchester the sky never gets completely dark on the days around the June solstice. The Sun never drops more than 13 degrees below the horizon. So, the darkest it can ever get is astronomical twilight.

Further south, below a latitude of 48.5 degrees north, the Sun drops more than 18 degrees below the horizon, and it gets fully dark, although the duration of twilight is still considerably longer around the June solstice than at other times of the year.

My wife and I have spent most of June 2019 near the village of Vidlin in the Shetland Islands – halfway between mainland Scotland and Norway. At this latitude (60.5 degrees north) on the solstice, the Sun rises at 3:33 am at sets at 10:39 pm giving 19 hours and 6 minutes of daylight and for the remainder of the time it gets no darker than civil twilight. In Shetland the period in the middle of the night when it doesn’t get properly dark is called the Simmer Dim. 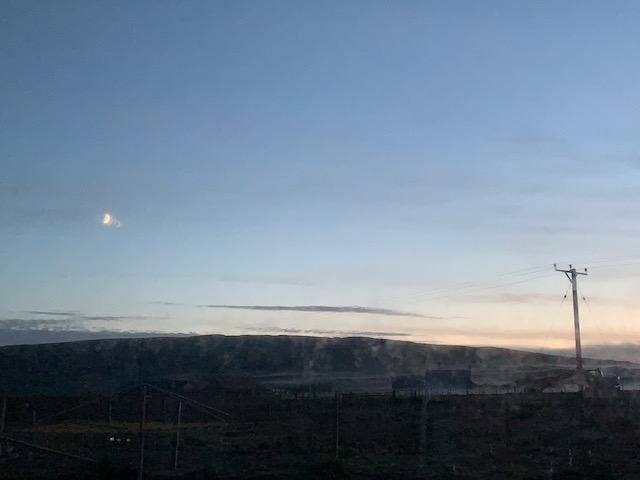 This photo was taken by my wife just before midnight. I was fast asleep at this time 😉

Every year on the days around the June solstice there is a Simmer Dim festival in Shetland where hundreds of bikers come from all over Europe to celebrate the light nights by eating, drinking and listening to music. Sadly We being in our 50s and now middle aged need our sleep and prefer being tucked up in bed!

I hope you have enjoyed this post and that those of you who live  well north of the equator, like us, are enjoying the long summer nights.

For my more mathematically inclined  readers, the elevation of the Sun at a given time is given by the following formula: