In this post I’ll talk about the measurement of time and the use of time zones throughout the world. This is particularly topical at this time of year.  In the early hours of Sunday 27 October the clocks go back an hour throughout the EU as Europe switches to winter time.

There is natural rhythm to the day in which the Sun rises in the east, then in the first half of the day moves steadily higher in the sky, reaching its highest elevation in the middle of the day. After reaching this point it starts to descend and sets in the west. 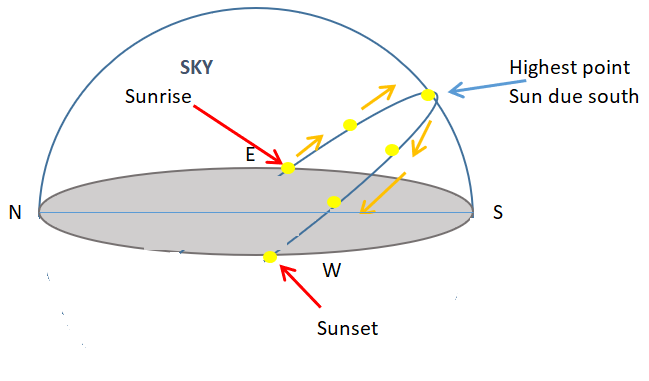 The path of the Sun in Manchester, England in September. For places in the Southern Hemisphere,  the highest elevation is achieved when the Sun is due North

When the Sun is at its highest in the sky it crosses an imaginary line drawn between north and south known as the meridian. The time when the Sun crosses the meridian is defined as noon and

This ‘natural time’ measured by the position of the Sun is called apparent solar time and is the time measured by a sundial (provided the Sun is shining!).  The interval between one solar noon and the next is  a solar day.

Sundial in Harrogate in the North of England

Interestingly, the length of the solar day isn’t constant. It varies throughout the year in a predictable way between a minimum of 23 hours 59 minutes and 39 seconds in mid-September and a maximum of 24 hours 30 seconds just before Christmas day. The reasons for this variation are twofold: firstly, the Earth moves in an uneven speed in its elliptical orbit around the Sun and secondly the Earth’s axis is tilted. They were discussed in detail in my post  How the length of a day changes over the year

How the length of an apparent solar day differs from its average value of 24 hours.

The y-axis shows the difference in seconds between the length of a solar day and 24 hours on a given date measured in seconds. So, for example:

The advent of time zones

As mentioned before, mean solar time is defined so the Sun is at its highest in the sky at on average 12 noon. However, this means that each different place has its own mean solar time depending on its longitude

For example, even in a relatively small country like the UK

With the advent of the railways in the nineteenth century, which allowed people to move rapidly  between cities and ran to a timetable,  It became important that all regions of the country used the same time. In addition, the invention of the telegraph enabling people to send messages almost instantly meant that any ambiguity about the time messages were sent and received needed to resolved. So, in 1880, the whole of Great Britain standardised on Greenwich Mean Time (GMT). GMT is the mean solar time at Greenwich in the East of London and lies on the zero degrees longitude line. Other countries standardised their timekeeping at roughly the same time and the concept of time zones was born.

The world’s current times zones are shown in the map below.  In most area the civil time,  used for day to day timekeeping, is  a whole number of hours fast or slow of GMT, although for precise writing the term UTC (coordinated Universal Time)  is now preferred to GMT.

The world’s time zones on 24 September 2019, from timeanddate.com – The times zones shown include DST if applied on that date. e.g. The UK is shown as UTC+1, whereas in in winter time it uses UTC.

Most large countries which span a range of longitudes (e.g. USA, Canada, Russia ) have multiple time zones. This ensures that the civil time isn’t too far from the local solar time.

Interestingly, for political reasons, China does not have any time zones. The whole country in on Beijing time which is  UTC+8. This means that in western China the civil time used by the government is out of step with the local solar time. In the city of Kashi in the far west of China the Sun is on average at its highest in the sky at 2:56 PM. Because the official time is so out of step with the rising and setting of the Sun, many of the non-Chinese locals ignore Beijing time and use their own time zone which is UTC+6

The advent of daylight saving time.

Daylight saving time (DST), the practice of temporarily advancing the clocks by an hour during the spring and summer months, became established in Europe and North America during the first word war and has been widely used in these countries for the last 100 years. However, it popularity has declined recently and a number of countries have abandoned it in the past ten years. I’ll talk more about DST in my next post.

I hope you have enjoyed this post. I’ve put a summary of the three different ways of measuring time below.

9 thoughts on “Time and time zones”