Last year as all my readers will know was the fiftieth anniversary of the first Apollo Moon landing.

Although the pictures and video from the Apollo 11 mission, including Neil Armstrong’s first steps on the Moon, are famous throughout the world and are freely available on platforms such as YouTube, it is interesting that outside America very little of the original news coverage has survived.

The reason for this is that, in the UK (and I suspect many other countries) in the early days of TV and radio, in general, after programmes had been broadcast any recordings were erased. The idea that programmes were important to keep for future repeats, for historical reasons or to be sold later was not widespread.

Video recording began to be available in the 1950’s. However, early video recorders were very expensive. In the 1950’s a machine could cost the equivalent of $400,000 and a videotape around $2,500 at today’s prices.  According to wired.com, as recently as 1977, a VHS video recorder, such as that shown below, cost around $6,000 (in 2020 dollars) and each blank tape around $80. So, only a small minority of households owned one. 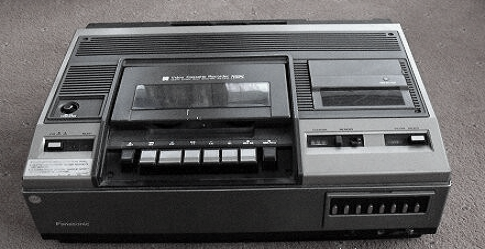 In the 1960’s and early 1970’s the high costs of recording,  and the belief that there would be little demand to see programmes more than once, meant that in the UK, recordings of TV programmes usually weren’t kept after they’d been shown. It wasn’t until 1981 that the BBC kept all its output in the BBC archives.

An amateur astronomer comes to the rescue

In the UK in 1969 there were only three TV channels: BBC1, BBC2 and the commercial ITV channel. All the original British TV coverage from the Apollo 11 mission  has been lost, but the sound coverage from the time has recently emerged due to the actions of a space enthusiast who was only 19 years old  at the time of the landings.

In July 1969, amateur astronomer and space enthusiast Kevin Kilburn aged 19 was living with his mother and sister in Ashton under Lyne in East Manchester, England. Kevin recorded the sound track from the British TV and radio coverage of the event onto four 150 mm audio tapes. After making the recordings Kevin never listened to them and never thought about them until June 2019 when he discovered that the BBC had lost (or more likely over recorded) their original coverage. Kevin then contacted the BBC who digitised them for their records and sent Kevin a digital copy of his recordings.  So, the good news is that, although the video from the original British TV coverage has been lost and will probably never be retrieved, we now at least have the sound track.

‘The tapes really are of huge interest. The BBC Apollo coverage is a permanent fixture in any list of missing British TV material – and it’s unlikely to ever change, as the live studio output it wasn’t officially recorded on videotape at the time. … the videotape department …. didn’t have capacity to record the BBC’s own output. The tiny amount we have is some absolutely shocking quality amateur domestic reel to reel video that was subsequently transferred to 16mm film, but the majority of what it contains is purely the NASA pictures, which of course exist in much better quality anyway. As far as audio recordings, we previously had only 48 minutes of off-air audio of the BBC coverage from another source. Now thanks to you we have over eight hours!’

Kevin has very kindly given me a copy of all his recordings There are 8 audio files in total and by clicking the  links below you can download two of them:

The files  have been compressed into .zip format and are approximately 300MB in size and each file took around 10 minutes to download on my (rather slow) internet connection.

I hope you enjoy listening to them!

Further Notes on the contents of the tapes

The following gives some some further information and timings on the tapes recorded by Kevin.

00:08:48 – 00:18:14    BBC APOLLO 11 – MICHELMORE – AT 17 mins and 5 secs past 9, Armstrong and Aldrin due to touch down. IN SPACE STUDIO, JAMES BURKE, PATRICK MOORE, DR. DAVID GRAYSTER (CONSULTANT AVIATION PHYSIOLOGIST) MICHAEL CHARLTON AT MISSION CONTROL, AT OBSERVATORY IN BRIGHTON GEORGE HOLE. ABOUT TO ACQUIRE SIGNAL

14 thoughts on “British coverage of Apollo 11”