Many of you will have seen the pictures last year showing long ‘trains’ composed of as many as sixty SpaceX Starlink satellites crossing the sky. 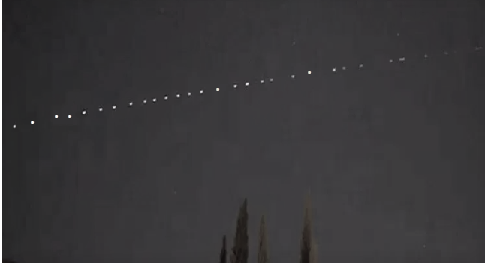 A ‘train’ of SpaceX Starlink satellites just after their launch. In the days after launch these trains break up as the satellites position themselves into their final orbits

These satellites are being launched to deliver broadband to every corner of the globe.  180 have already been sent into orbit at the time of writing this post.

Last year SpaceX came under fire for their brilliance. They had magnitudes of 2 to 3, which was much brighter than had been expected.  For those of you not familiar with the term magnitude, see the notes at the bottom of this post.

SpaceX is experimenting with a new dark coating that will reduce the brightness of the satellites. However, of the 60 new satellites sent up in early January 2020, only one had the dark coating. Astronomers won’t know fully the effects of the new coating until late February when the darker satellite has reached its operational orbit. To mitigate matters further SpaceX have also agreed to share  co-ordinates of the spacecraft so that observations can be planned to avoid the objects if  possible.

The purpose of the satellites is to provide worldwide fast Internet coverage. Traditional satellite internet operators have a small number of satellites  in geostationary orbit, 35,800 km above the  Earth’s surface. This limits speed, coverage and bandwidth. It takes around 0.12 seconds for radio-waves to travel between the satellite and Earth.  SpaceX’s plan is to surround the Earth with a large number of satellites in Low Earth Orbit (LEO). These would link together into a ‘floating internet backbone’, providing a faster alternative to the fibreoptic  cables that span the world.

By the year 2025 SpaceX plan to have 12,000 Starlinks in orbit distributed as follows

According to a report on space.com ,SpaceX have sought permission to put an additional 30,000 Starlink satellites into orbit. If this were approved and the satellites were launched, it would bring the total number up to 42,000. To put this in perspective, in December 2019 there were only 2,200 operational satellites orbiting the Earth, of which 1,418 were in LEO, which is defined as an orbit below 2,000 km, (data from Union of Concerned Scientists (2019)). 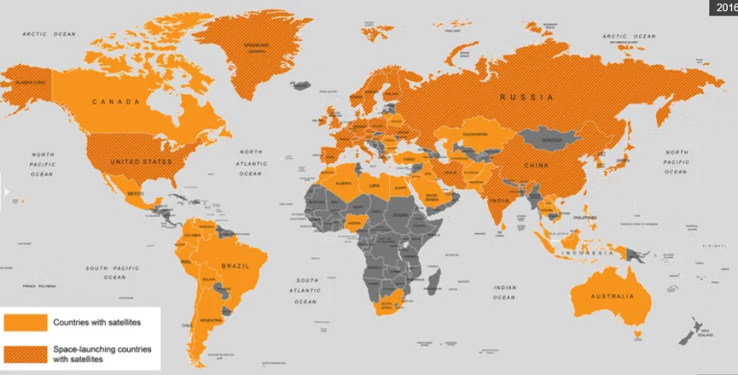 In the map above

High speed satellite broadband is likely to be a big growth area in the next 10-15 years.  By 2030, the market is likely to be worth tens of billions of dollars per annum, possibly even more. So, it is not surprising that other companies are planning similar large LEO satellite constellations. These include the following.

There has been much written in the press recently about the impact of these satellite constellations on astronomy. Compared to astronomical objects and also satellites in higher orbits, LEO Satellites move rapidly across the sky and are in general brighter than other satellite because they are closer to Earth. In raw astronomical images they are sometimes captured as they move across a telescope’s field of view. Whenever this happens, they appear as bright streaks, looking a little like meteor trails. However, Image processing software used by astronomers (including amateurs) can identify satellite tracks and strip them out of the final images.

This might present more of an issue if the number of LEO satellites were to increase twenty-fold in the next ten years. Rather than an image occasionally containing a single satellite trail, a typical image would contain multiple trails as numerous satellites crossed the field of view. There also might be  potential problems with wide field surveys such as the LSST (which is such a large topic I’m going to talk about it in detail in a future post). The  LSST telescope, which is scheduled to be completed in 2022, will have a large field of view and very sensitive detectors which inevitably means that it will capture many satellites in its images. 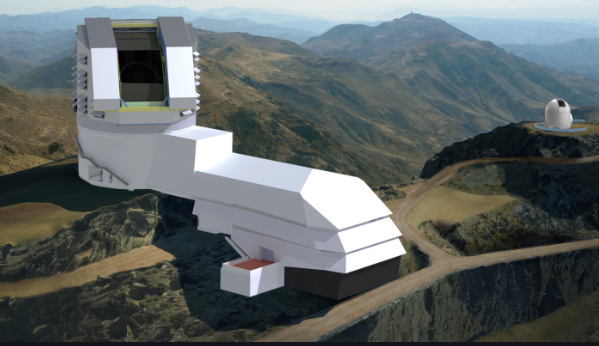 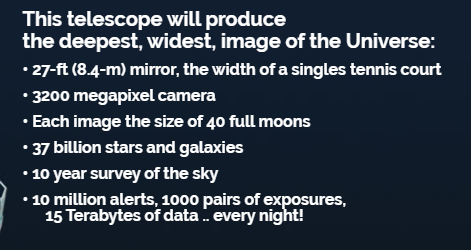 The impact on radio astronomy should ideally be very low. This is because all the new satellites should transmit outside the protected frequencies reserved for the use of radio astronomers. There are many of these protected bands including the region around 1420 MHz known as ‘the 21-cm hydrogen line’ and 22.2 GHz,  which is a frequency at which interstellar water vapour clouds  emit radio waves.

In May 2019 the director of the National Radio Astronomy Observatory (NRAO) Tony Beasley put out a carefully worded statement (https://public.nrao.edu/news/nrao-statement-commsats/)

‘Recent news reports of planned constellations of communication satellites, including the SpaceX Starlink proposal, have pointed out the potential impacts these systems may have on radio astronomy. For decades, the U.S. National Radio Astronomy Observatory (NRAO) and the Green Bank Observatory (GBO), in cooperation with the National Science Foundation, have worked to ensure that innovations in communications can advance while still preserving our ability to explore the Universe from Earth and conduct essential fundamental research through radio astronomy…..’

‘….Most recently, the NRAO and GBO have been working directly with SpaceX to jointly analyze and minimize any potential impacts from their proposed Starlink system. These discussions have been fruitful and are providing valuable guidelines that could be considered by other such systems as well. To date, SpaceX has demonstrated their respect for our concerns and their support for astronomy.’

It will be interesting to see how things develop over the next decade and how big the impact on ground-based astronomy turns out to be, but what is certainly clear to me is that satellite broadband  is likely to become more and more important over the next decade.

A  video containing some of the material in this post can be  viewed on the Explaining Science YouTube channel. This channel is a new venture and over the next few months I plan to upload additional videos.

Values in the magnitude scale were standardised  by nineteenth century astronomers  to make an increase in magnitude of 5 a decrease in luminosity of factor of 100. So for example, a star of magnitude 6  is  a hundred times fainter than one of magnitude 1.  The brightest star in the night sky Sirius has magnitude -1.4. The first artificial satellite Sputnik had a magnitude of around 6 – making it just about visible to the naked eye in an area without significant light pollution