In this post I’m going to talk about a new 500 million dollar telescope,  the Large Synoptic Survey Telescope (LSST), being built at Cerro Pachón in Chile,  and the survey of the cosmos it will  be undertaking over a 10 year period. 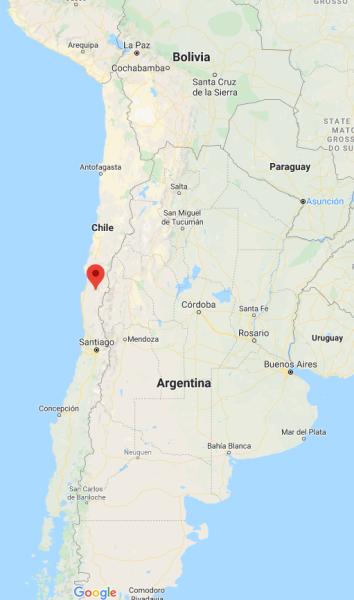 Cerro Pachón is located in the foothills of the Andes at a latitude of 30 degrees South and is around 2700 metres in altitude.

It is an area of exceptionally low humidity with clear blue skies and virtually no cloud cover. Because it is relatively close to the equator, the vast majority of the Northern Hemisphere sky can be seen as well as the entire Southern Hemisphere. With its high mountains with clear blue skies many of the largest telescopes in the world are located in the mountainous regions of Chile. In fact, there are two other large telescopes already at Cerro Pachón: Gemini  South which has a main mirror  8.1 metres in diameter and  the Southern Astrophysical Research (SOAR) telescope, which has a main mirror  4.1 metres in diameter. Both telescopes work not only at visible light wavelengths but at near infrared as well. At lower altitudes near infrared astronomy would not be possible because near infrared rays are blocked by water vapour in the Earth’s atmosphere.

Both the telescope itself and the observatory buildings are currently under construction. The diagram below is an artist impression of what the observatory will look like when it has been completed 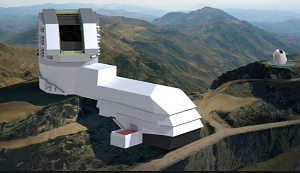 The telescope has three large mirrors. Although it is more expensive and complicated to construct than a one or two mirror telescope, the three-mirror design removes the different types of optical distortion more efficiently and so gives better quality images than a simpler telescope would do.

The camera has a resolution of 3.2 gigapixels, is the largest digital camera ever constructed and weighs almost 3 tonnes. The size of the area covered by its CCD detectors  is 3200 square centimetres, which is exceptionally large.

The large detector size gives the telescope an exceptionally large field of view (FOV) of 3.5 degrees, roughly seven times the width of the Moon. It is this large FOV which enables the telescope to survey the entire sky every three nights.  The huge light collecting area of the main mirror and the sensitivity of the CCD detectors in the camera (which will be cooled to -130 degrees Celsius to reduce noise) means that the images will be very deep, meaning that they will be able to show faint objects. In a pair of 15 second exposures the LSST will be able to see compact objects of 24th magnitude – roughly 16 million times fainter than can be seen with the naked eye.

Every patch of the Sky will be visited 1000 times over the ten-year period of the survey. A ‘visit’ is defined as two 15 second exposures taken with a given filter (which restricts light to a particular range of wavelengths). The LSST continues the long tradition of sky surveys in which astronomers observe a large region of sky over a period of time, rather than studying individual objects. The most famous early sky survey was done by the French astronomer Charles Messier in 1780. Messier surveyed much of the sky with his 10-cm telescope and catalogued 110 diffuse nebulae -many of which were found in the twentieth century to be galaxies outside our own Milky Way.  As it was well before the invention of the camera, Messier had to record his observation as hand drawings.

There will be four main types of data products

In January 2020 the Observatory buildings in which the LSST is situated were renamed to the ‘National Science Foundation (NSF) Vera Rubin Observatory’, or just ‘The Rubin Observatory’ for short, in honour of Vera Rubin (1928- 2016), who played a key role in the discovery of Dark Matter .  In addition, the LSST telescope is now called the Simonyi Survey Telescope after the Hungarian- American billionaire Charles Simonyi who donated $20 million to the project.

The LSST was proposed in 2001 and in 2010 became the National Science Foundation’s most important ground-based astronomy project.  All funding was in place by 2014,  the total cost (which includes the construction of the observatory buildings, IT hardware and software, the telescope and the massive digital camera) is approximately half a billion dollars.  Before all the funding was fully in place the construction of the main mirror and the tertiary mirror had already started in Arizona in 2008. These two mirrors took seven years to complete. 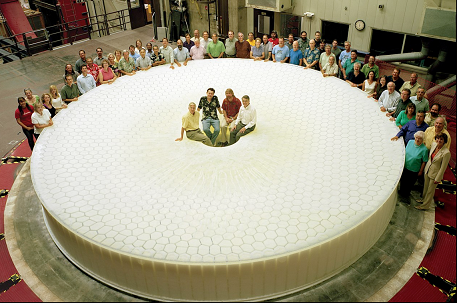 The secondary mirror was completed in Chile in 2019. Construction of the observatory buildings at Cerro Pachón started in 2015 and in 2019 all three mirrors were moved to the site.

According to the observatory website (lsst.org), construction is planned to finish at the site in early 2021 with science operations starting early 2023. However,  construction is currently on hold due to the COVID-19 emergency.  Therefore, it is unclear at the moment what the impact will be on meeting these deadlines which appear to be very tight. Hopefully, construction will be able to resume soon and the delays will be minimal

In  a later post I’m going to talk about the scientific objectives of the ten-year survey by this unique instrument and the threat to these by large constellations of Low Earth Orbit satellites such as SpaceX Starlink.

A  video containing some of the material in this post can be  viewed on the Explaining Science YouTube channel.

10 thoughts on “Surveying the Cosmos – Part I”