In recent years there has been an increase in interest in SETI (the Search for Extra-Terrestrial Intelligence).  SETI now has its own telescope, an array of 42 separate radio dishes known as the Allen Telescope Array.

In 2016 the Breakthrough Listen programme started and is expected to run for ten years.  It will survey the 1,000,000 nearest stars, the plane and centre of our galaxy, and the centres of the 100 nearest galaxies for signals of alien origin.  The programme is one of the Breakthrough Initiatives funded by the Russian billionaire Yuri Milner, who has donated $100 million.  This money will be used to buy time on existing telescopes, upgrade equipment on these telescopes and for staff costs.

Although its profile has increased recently, SETI is by no means a new field. Since the pioneering work of Frank Drake who looked for signals from two nearby Sun-like stars back in 1960 there have been a large number of searches for radio wave transmissions from aliens. These have looked at many thousands of stars over a large range of radio frequencies.  However, despite sixty years of searching, no extra-terrestrial alien signal has ever been detected and there is no evidence that intelligent aliens have ever visited Earth. It is becoming clear that the locality of our own galaxy is not full of advanced civilisations communicating with each other over radio waves, which some of the first SETI researchers in the early 1960s thought it might be.  There are a number of possible reasons why SETI programmes have so far detected no evidence of alien signals (which is sometimes called ‘the Great Silence’) and, in this post, I will discuss some of them. Although I am sure that there are  plenty of others which I haven’t covered.

Some reasons for the ‘Great Silence’

Reason 1- Aliens are sending out signals- we just have not found them yet. If this hypothesis is correct, extra-terrestrial intelligent life exists in our Milky Way galaxy and may be reasonably commonplace. Some of these Alien civilisations are sending out signals over radio waves at the frequencies we expect. It is just that we haven’t detected them so far because we haven’t been looking at the right place when a transmission reached the Earth. This seems a perfectly reasonable assumption. Clearly, we cannot be searching the entire sky at all radio frequencies all the time. Many keen advocates of SETI, such as Frank Drake, believe this hypothesis is true.

To illustrate the difficulties in finding such a signal consider that since the first ever radio transmission by Guglielmo Marconi back in 1895, radio waves have been leaking away from the Earth into space. In fact, Marconi’s signals will now be 125 light years away. However,  any radio signal from Earth will be very weak by the time it has travelled many light years and so will be very difficult for an alien civilisation a long distance away to detect. There have been relatively few occasions when a powerful signal such as the Arecibo message has been transmitted from Earth in a narrow beam aimed at a particular target. Such a signal is far easier to detect because it would be millions of times stronger than a radio transmission leaking off the Earth’s surface. However to pick up the Arecibo message, an alien civilisation would have to have a radio telescope trained on the Solar System, tuned to the right frequency at the time the message arrived to have any chance of detecting it. 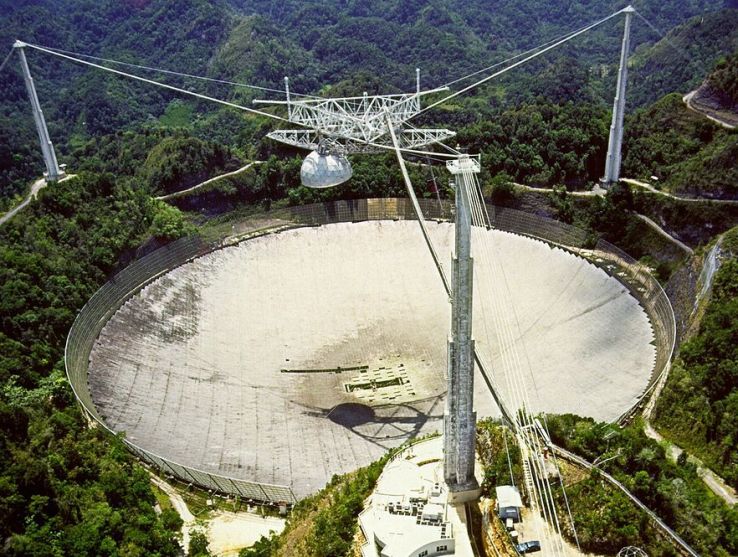 The radio telescope used in 1974 to transmit the Arecibo message

If there are enough alien civilisations out there transmitting and we survey enough stars for long enough then at some point, perhaps within the next fifty years, we will be lucky and  one of the searches will find an alien signal .

For most of the reasons I discuss next, no one is transmitting, there are no signals to find and as a consequence SETI will never detect anything.

Reason 2 – The Rare Earth hypothesis. Earth-like planets containing complex intelligent life forms (such as ourselves) are rare in the Universe and only a series of highly improbable events led to the evolution of intelligent life on Earth. If this is true, we are the only civilisation which has ever existed in the galaxy and SETI will never detect anything.  (This is discussed in a previous post.) 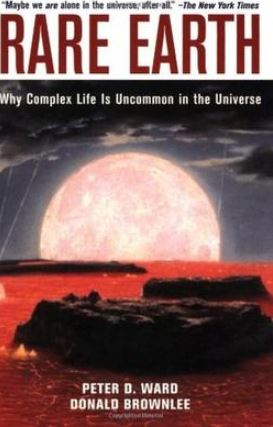 Reason 3 – In general, natural disasters cause intelligent lifeforms to become extinct before they can develop into civilisations. Intelligent life has existed elsewhere in the Milky Way and exists now but, on average it is wiped out well before it can develop into advanced civilisations.  In this hypothesis, our civilisation on Earth is one of the very small number of occasions when this has not happened. Intelligent lifeforms could be made extinct by disease(s) or sudden climate change which could be caused by the eruption of super volcanos blocking out much of their star’s light.

Reason 4 – As a general rule, it is the nature of intelligent life to destroy itself. Alien civilisations have existed in the galaxy and may still exist. However, on average most intelligent civilisations only last a short time before they destroy themselves. This could happen by all out nuclear war after they have discovered nuclear energy and made nuclear weapons. Or they could become extinct by making their planet unfit for habitation by pollution or by causing catastrophic climate change.  So, in the Drake equation,  L – the average lifetime of an advanced civilisation in years, is low. In this hypothesis, even though there may have been many alien civilisations in the galaxy in the past, the number existing today is very small

Reason 5 – Water-based worlds are the norm. On average most Earth-like planets (in terms of surface temperature, atmospheric pressure and composition and surface gravity) are completely or almost completely covered in water.  Although such an environment would not prevent the emergence of complex life, and some of these lifeforms might have great intelligence,  it is difficult to envisage how advanced civilisations of intelligent beings could emerge floating in a liquid environment.

Dolphins are the second most intelligent animals on Earth after man and are social animals. However, because their bodies have evolved in a water-based environment, and are adapted to swimming through water efficiently, they cannot hold tools or grasp anything and will never develop a civilisation.

Reason 6 – Intelligent beings do not in general develop into civilisations capable of transmitting and receiving radio waves. If we consider mankind, for most of Homo sapiens 250 000 years on Earth, they were primitive hunter-gatherers. In the history of the world there have been many civilisations such as those in ancient Rome or ancient Greece which have emerged, lasted for many hundreds of years, and then went into decline without ever becoming technologically advanced. It is possible that intelligent beings exist elsewhere in the galaxy and they have developed civilisations, but these have not developed further into advanced technological civilisations.

Reason 7 – Intelligent civilisations exist in the galaxy, but they do not communicate via radio waves. Although this is possible, I think it is unlikely. In my view the fact that radio waves: travel at the speed of light, are easy to generate and receive, can be easily modulated to carry a message and readily pass through the atmosphere of any Earth-like planet means that they are the natural way that any civilisation would try to communicate with other worlds.

Reason 8 – We are missing the signals. There are some assumptions that underly all SETI programs that may cause us to miss signals that are being sent. Extra-terrestrials might, for example, transmit very long signals with an extremely low data rate, or signals with an exceedingly fast data rate in which case we might miss their transmissions. In addition, SETI searches typically look at frequencies between 500 megahertz (MHz) and 10 gigahertz (GHz). Most of the frequencies used for radio astronomy fall within this range, so radio telescopes and all the receiving equipment is designed to work at this band of frequencies*. It is possible that an alien intelligence might employ radio frequencies which are much higher or much lower than we are looking for. Although a difficulty with this hypothesis is that it is very hard to build sensitive large receivers, which need a large collecting area which work at extremely high frequencies. At frequencies lower than 20 MHz, radio waves will not pass through the Earth’s atmosphere..

* Some observations are taken by smaller telescopes at the higher frequency of 22.3 GHz, and a few lower frequencies e.g. 408 MHz are used as well.

Reason 9 – The Zoo hypothesis. There are many advanced and intelligent alien civilisations out there, but they hide their existence from us so that they do not interfere with our development. Human beings are effectively in a cosmic zoo and are being observed by more advanced aliens. This idea is rejected by virtually all astronomers and is considered more the stuff of science fiction.

For example, those of you who follow Star Trek may recall a rule of the Federation called the ‘Prime Directive’. This prohibits Starfleet personnel from interfering with the internal development of alien civilisations which are below a certain threshold of technological, scientific and cultural development.

Even so it is an interesting and somewhat entertaining idea to consider and I talk about it in a previous post.

I hope you have enjoyed reading this post. My own view is that the Rare Earth hypothesis is correct and intelligent communicating civilisations are extremely rare in the Universe and that we are the only such civilisation among the 400 billion stars in the Milky Way. Although of course I may well be proved wrong on this matter!

18 thoughts on “Reasons for the Great Silence”