On 6 June 2012, a transit of Venus occurred. This rare astronomical event, when Venus passes directly in front of the Sun, and appears as a large black dot on its surface slowly moving from one side to the other in about 3 hours, has only happened eight times since the invention of the telescope (ref 1). This post talks about the transit of Venus and why it has been so important to the development of astronomy. 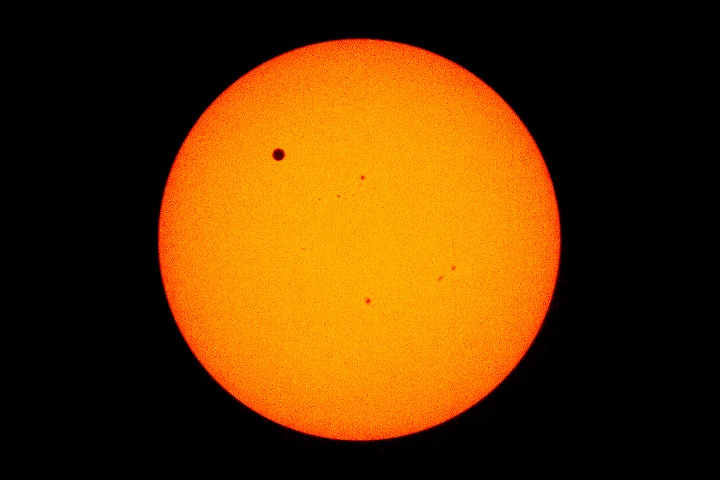 The 2012 transit of Venus – Image from NASA. Venus is the large dot on the top left of the Sun’s surface.

Why transits of Venus are so rare.

The Earth takes slightly longer than 365 days, 365.256 days to be precise, to complete one orbit of the Sun. Venus, which is both closer to Sun and moves faster in its orbit, takes 224.701 days to complete one orbit. The point in time when Venus is closest to the Earth and lies between the Earth and the Sun is called inferior conjunction. The time interval between one inferior conjunction and the next is on average about 584 days. This is time it takes for Venus to “gain a lap” in its orbit around the Sun. This is shown in the diagrams below. 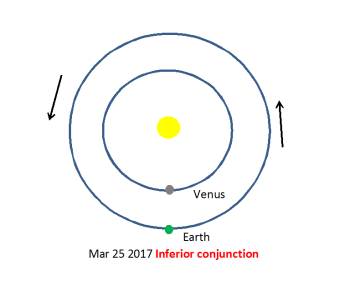 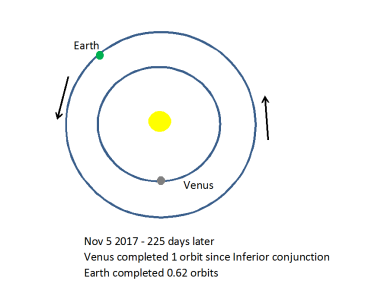 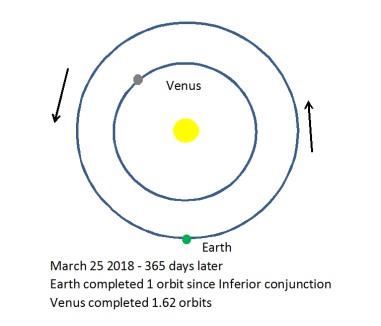 The orbit of Venus around the Sun is tilted by a small angle, 3.4 degrees, with respect to the orbit of the Earth, as you can see below.

What this means is that, for the vast majority of inferior conjunctions, Venus won’t pass directly between the Earth and the Sun, giving rise to a transit.  Instead Venus will appear to be just below or just above the Sun in the sky. There are only two narrow time windows in the year when an inferior conjunction can give rise to a transit of Venus. These are marked as A and B in the diagram. The first is for a few days around June 7 and the second is for a few days around December 9. The next time we will be able to see a transit of Venus will on be 11 December 2117. So I won’t be around to see it!

One numerical coincidence is that in the time it takes the Earth to complete 8 orbits of the Sun – 2,922 days – Venus completes almost exactly 13 orbits (13.004 to be precise). Or, to put it another way, 8 Earth years is equal to almost exactly 13 Venus years.

This means that every 8 Earth years, because (almost but not quite) a whole number of Venus years have passed, an inferior conjunction occurs on the same date in the year minus 2/3 days. So when a transit of Venus occurs there is almost always another transit 8 years later.

The importance of the transit of Venus

The most fundamental distance unit in astronomy is the astronomical unit, normally abbreviated to AU. This is the mean distance between the Earth and the Sun. In the early 17th century the German mathematician Johannes Kepler (1571-1630) worked out the relationship between the distance of a planet and the speed it orbited around the Sun, a relationship we now know as Kepler’s law.

When astronomers applied Kepler’s law they could work out the distances of the planets from the Sun relative to the distance between the Earth and the Sun. So for example, Venus is a distance of 0.72 AU from the Sun, Mars 1.52 AU, Jupiter 5.2 AU and the Earth is 1 AU. What was not known is how large an AU was. Was it 50 million miles? 100 million miles? or 200 million miles? If we could find out how big an AU was we could work out the real size of the Solar System and the distances between all the objects within it. Determining  the size of the AU became one of the key problems in 17th and 18th century astronomy.

Astronomers realised that observations of a transit of Venus can be used to calculate the size of the AU. The calculations are a little detailed but in essence rely on the fact that transits occur at slightly different times when they are observed at different places on the Earth. If the start and end times of the transit are accurately timed in two different places and the distance between the two places is known, then the distance between the Earth and the Sun can be calculated. More detail is given in the following link: http://www.exploratorium.edu/venus/question4.html.

The first person to measure the size of the AU, based upon observations of a transit of Venus, was the British astronomer Jeremiah Horrocks (1618-1641), pictured below.  Horrocks,  who later died at the tragically young age of 22, observed the 1639 transit and estimated a value of 96 million km by combining his observations made near Preston, in the North West of England, with those made at the same time by a colleague 60 km away. 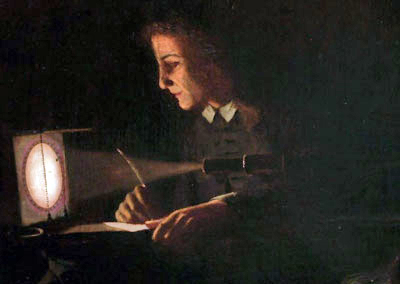 Horrocks’s value, which is lower than the correct value, was later refined by observations of the 1761 and 1769 transits to 151.7 million km, which is within 1.5% of the accepted value today.

Once the size of the AU was known, it was possible to determine the real size of the solar system and, using a technique called stellar parallax, which I will talk about in a later post, the distances to the stars.

Venus has an atmosphere

The Russian astronomer Mikhail Lomonosov observed the 1761 transit and reported a bump or bulge of light off the solar disc as Venus began to exit the Sun. He correctly attributed this bulge to the bending of sunlight by an atmosphere around Venus. This was the first time that an atmosphere had been found around any planet other than the Earth.

The 2012 transit of Venus was observed by millions of people throughout the world, although not everyone in the world could see it. 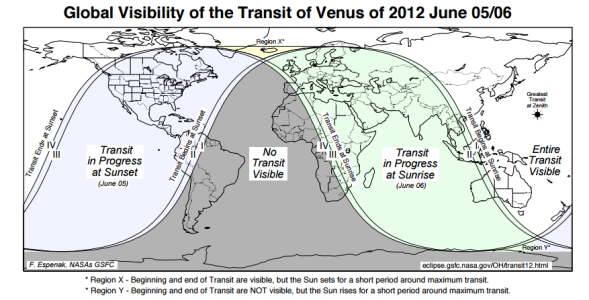 Even though the distance from the Earth to the Sun is now well known, so the transit was of lesser scientific important than earlier transits, it would still have been an interesting sight to observe. The large slowly moving black dot on the Sun’s surface caused by Venus could be safely seen by projecting the image of the Sun onto a piece of paper or observing the Sun directly though a telescope with a filter designed to cut out most of the Sun’s light. It was also possible to view the Sun through the special glasses which are sold to view solar eclipses.

There is now a video on the Explaining Science YouTube Channel which describes Venus’s orbit and phases. To view it, please click on the link below

15 thoughts on “Transit of Venus”