In this post I’ll look into the distant future and talk about humans living and building settlements on the planet Venus. Because it is well beyond what we can achieve with our current technology, it is a topic that been more in the realm of science fiction rather than factual scientific writing. However, even though there are many difficult obstacles in the way, I think it is very likely to happen at some point in the distant future.

Venus as seen through a telescope – image from NASA.

Why would we want to live on Venus?

There are a number of reasons why humans would want to colonise Venus.  The first three also apply to the Moon, Mars or Mercury.

“I believe that the long term future of the human race must be space and that it represents an important life insurance for our future survival, as it could prevent the disappearance of humanity by colonising other planets.” 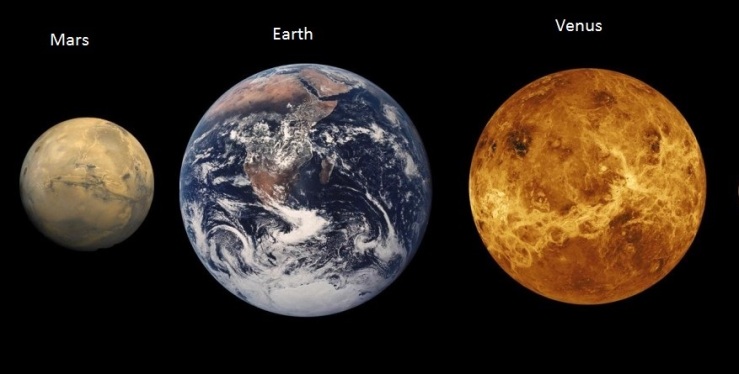 As readers of my previous post will know, Venus is a very inhospitable world. Its surface temperature is on average nearly 500 degrees Celsius and its air pressure is a crushing 92 times that of the Earth. No spacecraft has been able to survive for longer than about an hour on its surface without being destroyed by the intense heat and pressure. The thick atmosphere forms a thermal blanket around the planet. So even at the poles the temperature is not any cooler and, although the temperature drops with altitude, there is nowhere on the planet’s surface which is less than than 380 degrees Celsius. In addition, there is almost no water or oxygen in the atmosphere – both of which are essential for life and Venus does not have a magnetic field to protect the planet from the harmful effects of the solar wind.

Because the temperature and pressure both fall with altitude there is a region around 50 km above the planet’s surface where both the atmospheric pressure and temperature are similar to that on the Earth.

The graph above shows how the temperature and pressure of Venus’s atmosphere varies with altitude (from Wikimedia Common). 1 Bar is air pressure at sea level on Earth

At this 50 km point, the atmosphere of Venus is the most Earth-like environment, other than Earth itself, in the Solar System. In a paper written in 2008, the NASA scientist Geoffrey Landis suggested building floating cities in the Venusian atmosphere (Atkinson 2008) .  The atmosphere of Venus consists of 97% carbon dioxide, which is denser than the Earth’s atmosphere, which is mainly composed of nitrogen and oxygen. Landis suggested that a large space filled with with breathable air could float high above the Venusian surface in the same way that a helium balloon floats in the Earth’s atmosphere.

It would be possible to build large enough spaces for humans to live and work in, although there is the obvious risk that if there were a major leak the entire structure would fall down to the surface to its destruction.

I think that humans will only be able to live on Venus after the entire planet has been transformed to make it more Earth like. This is called terraforming. This process, which is well beyond our current technology, and is at the moment more in the realm of science fiction writers, will involve removing nearly all the carbon dioxide from the atmosphere, adding oxygen, reducing the surface temperature and pressure to similar values to those on Earth, and adding water. It will also be necessary to do something about the long day/night cycles.  A day on Venus lasts 116.8 Earth day which is too long for Earth life to adapt to. (Incidentally, Mrs Geek recently read and enjoyed Karen Thompson Walker’s novel “The Age of Miracles” which describes how humanity struggles to adapt to a world in which the length of a day is much longer than 24 hours.)

In my next post I will discuss how, if humanity doesn’t destroy itself and we become a very advanced civilisation, we could terraform Venus.

Interestingly, the amount of solar energy reaching the surface of Venus is, on average, far less than that reaching the surface of the Earth. This is because, although Venus gets more sunlight, most of the solar energy which hits Venus is reflected back into space by the thick cloud layer high above the planet’s surface. Most of the remaining sunlight is absorbed by the thick atmosphere before it reaches Venus’s surface.  Howver,If Venus is terraformed its surface will get more sunlight than the Earth, because its clouds and atmosphere will be much thinner.

45 thoughts on “Living on Venus”