Terraforming is the process of changing the global environment of a planet  in such a way as to make it suitable for human habitation. Because it is so far beyond our current technological capabilities, most articles about terraforming have been written by science fiction writers rather than scientists.  For example, there is  an entry for a terraformed Venus in the science fiction work “Encyclopaedia Galactica” which is set thousands of years in the future.

Originally a hot dry greenhouse world, (Cytherian Type) with an atmosphere consisting mostly of carbon dioxide with a surface pressure 94 times greater than that of Earth. The planet was shrouded with clouds of sulphuric and hydrochloric acid and the mean surface temperature was 480 C, making the world extremely hostile to terragen and carbon-based life. Because of this the planet was sparsely populated for many thousands of years; recently it has been successfully terraformed.

So far there has been very little detailed scientific research on terraforming Venus. Most papers on terraforming have focussed on Mars. Even so, there is no reason why – given enough resources and time – an advanced human civilisation would not be able to terraform Venus.

It has to be said at this point that the international willingness to commit to a project like this is much harder to imagine than the existence of the technical ability to do so.  There would have to be fundamental changes in the way in which human beings work together on a global scale, and the conditions of life for the whole of humanity would have to be considerably better than they are now, were such vast amounts of time and money to be committed to a project like this.

However, setting that aside, it is interesting to consider the various challenges to making Venus habitable, so that humans can live and work on the planet without any need for protective equipment, such as space suits or oxygen supplies.

One way to cool Venus would be to build a giant sunshade to block most of the Sun’s rays from hitting the planet. This was described in detail in a paper written by the late British science writer Paul Birch (1991).

The shade would orbit the Sun at a specific point about 1 million km above the planet’s surface called the L1 Lagrange point, shown as L in the diagram above (see note 1). It would need to be slightly larger than the diameter of Venus, 12,100 km, to fully shade the planet. The cost and technological challenge of building such a shade would enormous. It would need to be 100 billion times larger in surface area than the International Space station, shown below, which is the largest object ever built in space.

It is likely that such a shade would be built up from thousands or even millions of smaller individual shades and would take many decades to complete from start to finish. As the shade neared completion, and most of the Sun’s rays were blocked from hitting the planet, the surface of Venus would begin to cool.  Interestingly, when the shade was complete, because Venus would no longer be lit up by the Sun, to an observer on Earth Venus would go from being the third brightest object in the sky (after the Sun and the Moon) to being invisible.

Eventually the temperature would drop to the freezing point of carbon dioxide (-57 degrees) and the seas, oceans and lakes of liquid carbon dioxide would begin to freeze. Much of the remaining carbon dioxide in the atmosphere would fall as snow.

This entire cooling process would take hundreds of years from start to finish. When it had completed the next step would be to ensure that when the shade was removed, allowing the planet to warm up, the frozen carbon dioxide wasn’t released back into the atmosphere. One way this could be achieved would be to cover up the frozen carbon dioxide oceans with an insulating material and provide some sort of refrigeration system to keep it cool. Once the carbon dioxide was safely locked away the sunshade could then be removed to allow the planet to warm up again. Because nearly all the carbon dioxide would have been removed from the atmosphere it would no longer provide such a powerful greenhouse gas.

Venus is a very dry planet. Its atmosphere contains only a small trace of water and there is no water on its surface. By comparison, on Earth 71% of the planet’s surface is covered by water and  there are about 1.39 billion cubic kilometers of water on the planet.  The breakdown of how this water is distributed is shown in the tables below (U.S. Department of the Interior 2015) 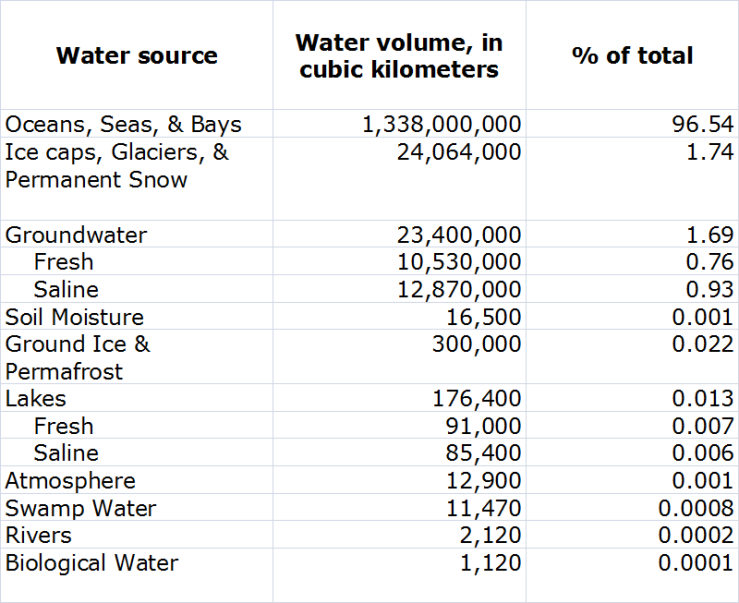 How could we get a large amount of water to Venus?

It would undoubtedly be necessary to import a huge amount of water to Venus to make the entire planet habitable for plant and animal life, but it would not be necessary to have most of the planet covered with deep oceans. Probably around 30 million cubic kilometres of water (roughly 2% of the amount found on Earth) would be sufficient.

There various ways of transporting this water to Venus.  One obvious option would be to transport the water from the seas and oceans of Earth by cargo-carrying spacecraft. One cubic kilometre of water weighs one billion tonnes, so 30 million cubic kilometres of water weighs 30 thousand trillion (30,000,000,000,000,000) tonnes.  If we had a massive fleet of one thousand  spacecraft, each of which could carry a payload of one thousand tonnes would need 30 billion missions to carry this amount of material. This is clearly not feasible!!

Another possibility would be to transport only hydrogen, and not necessarily from the Earth.  A water molecule consists of two hydrogen atoms and one atom of oxygen, but the latter is sixteen times heavier than a hydrogen atom.  The mass of material taken to Venus would therefore be reduced by 90%.  Water could be produced by chemical reaction of the transported hydrogen with the remaining carbon dioxide in Venus’s atmosphere. The hydrogen could be created on Earth by splitting water molecules into their component elements, or it could be sourced elsewhere.  For example, it could be collected by scooping it up on an orbiting ring from the atmosphere of one of the giant planets in the outer Solar System and transporting it to Venus by spacecraft.  Regardless of where the hydrogen is sourced, this method of providing Venus with water would still be prohibitively expensive.

Saturn has a number of ice moons such as Hyperion (shown below), an irregularly shaped object 360 by 260 km which consist mainly of ice, covered in a thin layer of rock.

The proposal is that we could build a huge structure on Hyperion which would use the Sun’s heat, concentrated by mirrors, to put out a jet of steam into space in the same direction as it orbits Saturn. This is shown in the diagram below. 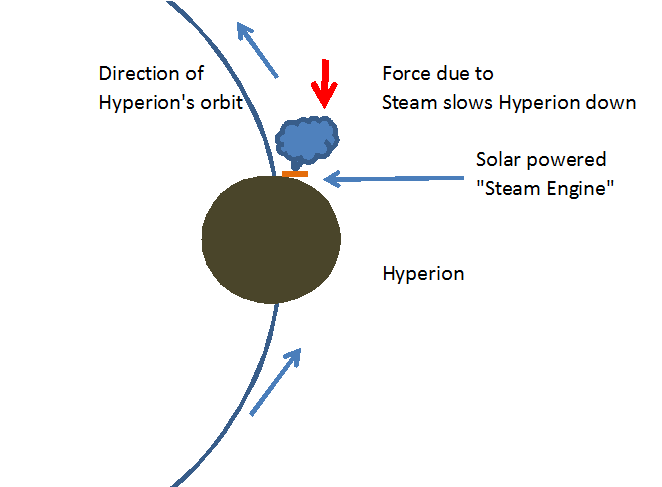 This jet of steam will provide a force which will gradually slow down Hyperion in its orbit causing it to gradually spiral inwards towards Saturn. After about 30 years Hyperion will be in an oval-shaped orbit which will cause it to pass close to the giant moon Titan.

Titan is much larger than Hyperion and the near collision between the two objects will give Hyperion so much speed that it will be ejected from orbit around Saturn.  If the speed and angle are just right, after it escapes from Saturn it will be on a path which will take it close to the giant planet Jupiter. This technique is known as a slingshot and NASA uses it to send spacecraft to the outer Solar System.

As Hyperion passes Jupiter, the giant planet’s gravity will hurl it into the inner Solar System. If the angle of approach to Jupiter is just right it will be possible to send it on such a path that it will approach Venus slowly enough to be captured by Venus’s gravity and go into orbit around the planet. Once in orbit Hyperion would be gradually broken up and its water transferred to the planet’s surface.

Although this somewhat convoluted plan might appear to be something out of an exotic science fiction story, it obeys all the laws of physics and could potentially be achieved by an advanced human civilisation which devoted the resources to do it.

In order to be habitable Venus would need a similar level of oxygen in its atmosphere to that on the Earth. On Earth oxygen makes up about 21% of the atmosphere, whereas Venus’s atmosphere has almost no oxygen.  Compared to the other challenges this would be relatively easy to resolve. The oxygen concentration could be increased by plant life which,  uses a process called photosynthesis to convert carbon dioxide and water into carbohydrates and oxygen.

On Venus the slow rotation of the planet means that a day lasts 116.8 Earth days. Most Earth lifeforms would struggle to adapt to such a long day/night cycle. A shorter day could be created by means of orbiting shades and mirrors.

On the Earth its magnetic field forms a protective shield around the planet which protects its surface from electrically charged particles from the Sun (the solar wind) and from outer space (cosmic rays). Without a magnetic field  there would be an increased risk of cancer for anyone who ventured outdoors for any significant period of time.  To make Venus completely habitable it would need to be given an artificial magnetic field. I will discuss this in a later post

1) At this point the shade would orbit the Sun in exactly the same time, 224.7 days, that it takes Venus to orbit the Sun. Therefore it would always be shading the planet once it was put in place.

2) Any timescales here should be treated as very approximate. The actual values depend on the properties of the Venusian atmosphere during the cooling scenario.

U.S. Department of the Interior (2015) How much water is there on, in, and above the Earth?, Available at: http://water.usgs.gov/edu/earthhowmuch.html (Accessed: 7 February 2016).