The Earth receives more energy from the Sun in a single hour than the whole of humanity consumes in an entire year.

In this post I’ll talk about some of the science behind this interesting fact and I’ll also discuss how solar energy is likely to become more important to us in the future.

How much solar energy hits the Earth?

The Sun generates energy by nuclear reactions which occur at its dense hot core .It produces a massive 382.8 trillion trillion (3.828  x  1026 ) watts of electromagnetic radiation (Williams 2018) mostly in the form of visible light, infrared and ultraviolet. As you get further from the Sun, the intensity (the power per unit area) of its radiation falls.

The solar constant is the intensity of the Sun’s radiation at a distance of 1 astronomical unit (the average distance of the Earth from the Sun). It is given the value of 1,361 watts per square metre (W/m2). However, because the output of the Sun is slightly variable, it fluctuates by 0.1% around this value.

The total energy consumed by humanity in 2017 is slightly less than this at 160,000 TWh (Enerdata 2018). This figure includes not just energy used to generate electricity, but also energy used directly for heating (for example by burning firewood, coal, oil or gas), used for transport (mainly petrol, diesel and aviation fuel) and energy used in industrial processes.  The total amount of electricity consumed in 2017 was approximately 22,000 TWh.

The potential for solar energy.

There are two different ways of generating electricity from sunlight. One way is to concentrate the Sun’s energy using mirrors onto a small area and use the heat generated to produce steam to turn a turbine which generates electricity. The other way is use arrays of photovoltaic cells (more commonly known as solar panels) to generate electricity directly from sunlight. 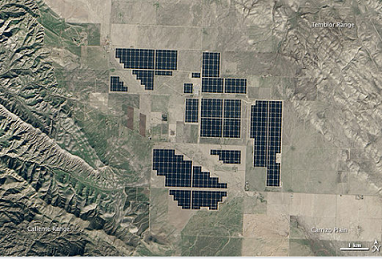 A photo taken from space of the Topaz solar farm in California. It covers an area of 19 km2 (not all of which is covered with solar panels) and generates around 1.25 TWh of electricity per annum.

The majority of solar electricity is generated this way, much of it is produced in solar farms like the one in California shown above. As prices of solar panels continue to fall and their efficiency increases, this type of solar energy is where the growth will be.

The growth of solar energy (Our world in data 2018)

One advantage that solar energy has over other forms of energy is that it has an almost unlimited potential because of the vast amount of energy reaching the Earth from the Sun. As I’ll show next it would be necessary to cover only a relatively small fraction of the Earth’s surface with solar panels to meet all of humanity’s energy needs.

To calculate the size of this area, the first thing we need to consider is the amount of solar radiation which actually reaches the Earth’s surface. Although the solar constant is 1,361 W/m2, this is the intensity of the radiation which hits the top of the Earth’s atmosphere. Even on a cloudless day not all this radiation reaches the ground; some is reflected back into space and some is absorbed by the atmosphere.

On a clear day, if the Sun is directly overhead, the intensity of the radiation hitting the ground directly from the Sun is around 1,050 W/m2, on top of this a further 70 W/m2 comes from the bright blue sky, giving a total of 1,120 W/m2. (If is cloudy this figure will be lower.)

In fact, the Sun can be directly overhead  only  in the tropics.  As shown below, when the Sun is lower in the sky, the intensity of the solar radiation is reduced because its rays are spread out over a larger area and because they must pass through more atmosphere before they hit the ground. At night when the Sun is below the horizon the solar intensity is clearly zero. 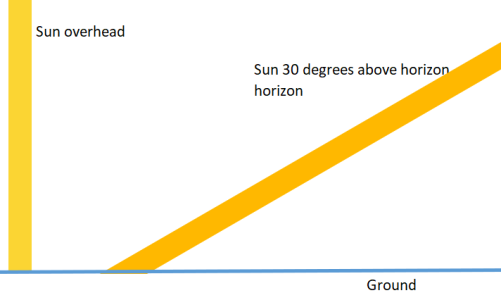 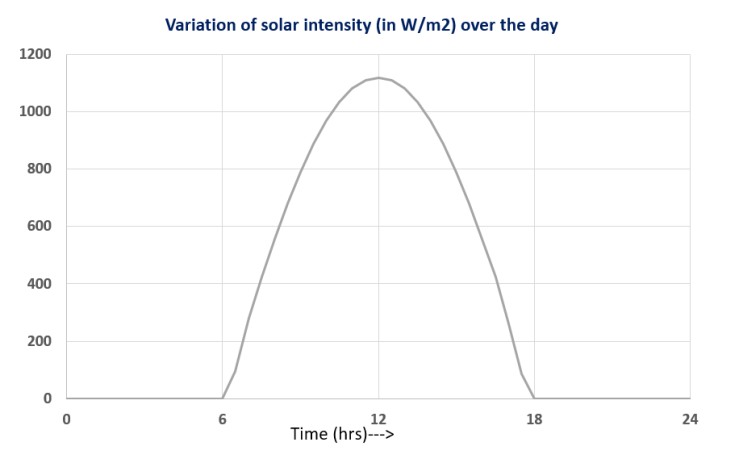 The diagram above shows the variation in the solar intensity at the equator, at an equinox when the Sun is directly overhead at midday. The time axis uses the solar time i.e. the Sun rises at 0600, is at its highest at 1200 and sets at 1800. A cloudless day is assumed.

If we average out over an entire 24 hour cycle the amount of solar radiation hitting the Earth’s surface (known as the solar irradiance) on a clear day at the equator on the equinox is approximately 340 W/m2. The most efficient solar panels on the market convert approximately 22% of solar irradiance to electrical energy. This means that, averaged over an entire 24 hour cycle, the solar electric power which could be generated is 73 W/m2, which is approximately 5% of the solar constant. At higher latitudes the Sun is lower in the sky and so the amount of solar electric power which could be generated is less. The amount of solar energy is  reduced by cloud cover. For example, in the cloudy north west of Scotland the solar irradiance averaged out over a year is only 72 W/m2, about one fifth of its value at the equator.

If averaged out over 12 months and over all locations on the Earth’s surface, then the average solar irradiance is 170 W/m2. This means that we would need to cover 586,000 square km of the Earth’s surface with solar panels to generate all the world’s energy needs, an area about 15% larger than Spain. The details of the calculation are given the notes at the bottom of this post. This number is relatively small, only 0.11% of the surface area of the Earth. However, one issue is that countries which could generate the most solar energy (particularly those in Africa) actually have modest energy consumption and many densely populated countries, particularly those in Northern Europe, have high energy consumption and receive relatively little sunlight. For example, if we were to take the UK which has a small surface area, receives comparatively little sunlight compared to the world average, and is densely populated with a high energy consumption, we would need to cover about 5.2% of its surface with solar panels, which would be difficult. Interestingly the UK is ideally placed for offshore wind farms and plans to generate 30% of its electricity in this manner by 2030.

At the moment, solar power  not the largest renewable source of electricity. As shown in the chart below, in 2016 a total of 5,877 TWh was generated by renewables. Of this, the vast majority (4,023 TWh) was generated by hydroelectricity, followed by 960 TWh by wind; solar energy contributed 333TWh and the remaining 561 TWh by all other renewables combined. 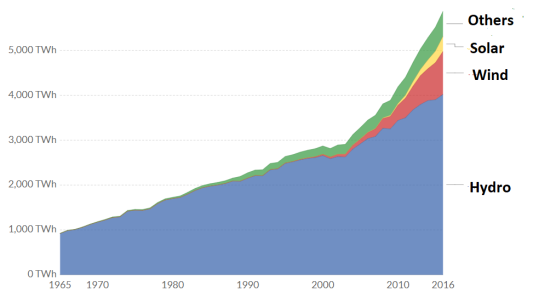 From Our world in data (2018): the data excludes so called ‘traditional biofuels’ e.g. burning wood which may or may not be renewable

One clear advantage that solar power has is that it is possible to generate electricity on a small scale. A single panel four metres square attached to a rechargeable battery would be able to generate and store enough solar energy for lighting and cooking for a family in Africa. Solar panels have no moving parts and once purchased should work for decades.  It is this ability to generate electricity on a small scale that may revolutionise the lives of some of the poorest people in world, an idea I shall discuss further in my next post.

For small solar installation it is common to increase the average intensity of the sunlight by tilting the panel towards the Sun. For instance, small arrays of solar panels in the UK are often tilted to face south. It is clearly difficult to do this for the very large arrays of solar panels found on solar farms.

Note to calculation: In any large structure which generates solar electricity there must be gaps between the solar panels. In these calculations I have assumed that one sixth of the area of a solar farm/large array of solar panels is not covered by panels.

Calculation for the Earth

Calculation for the UK

Our world in data (2018) Global renewable energy consumption over the long-run, Available at: https://ourworldindata.org/renewable-energy (Accessed: 23 February 2019).