In this post I will talk about the work of the International Dark-Sky Association (https://www.darksky.org/)and the visit I made a few years ago to the Kielder Observatory, which is in the Northumberland Dark Sky park in northern  England.

The International Dark-Sky Association (IDA) was founded in 1988 by David Crawford a professional astronomer, who spent most of his career at the Kitt Peak Observatory in Arizona, and Tim Hunter a medical doctor and a keen amateur astronomer. The IDA’s principle approach is to raise awareness about the value of dark skies and to encourage their protection and restoration, where they have been lost to light pollution.

Although primarily an American organisation, the IDA has a global reach.  In 2017 it had 4 000 members in 70 countries. Of these 70 countries, 18 of them had local IDA branches known as ‘chapters’.

The global reach of the IDA www.darkysky.org

Some of the activities of the IDA

One of the things that the IDA campaign against is the excessive use of lighting at night outdoors, particularly blue light. Blue light is scattered more than longer wavelength red, orange and yellow light and so causes more skyglow (where the night sky glows faintly as a result of light pollution). The IDA encourages the American lighting industry to move  towards lower CCT (this stands for colour correlated temperature, the lower this value the less blue light that is emitted) and provide a seal of approval to lighting which minimises glare, light trespass(shown below) and has a relatively low contribution to skyglow.

The IDA provide guidance for sports clubs in the US to promote lower lighting angles, lower brightness of lighting and only light up areas which need illumination. They also give presentations and exhibit  at conferences and trade fairs throughout the year, including the annual artificial light at night conference, and they produce variety of public outreach materials. The IDA also partner with various US government entities to protect night skies and promote quality outdoor lighting.

However, the activity the IDA is most famous  for, particularly outside the US, is their Dark Sky Places programme. In this programme, there are six different classifications of Dark Sky Places but the ones I’m going to focus on here are: Dark Sky Communities, Dark Sky Reserves and Dark Sky Parks. 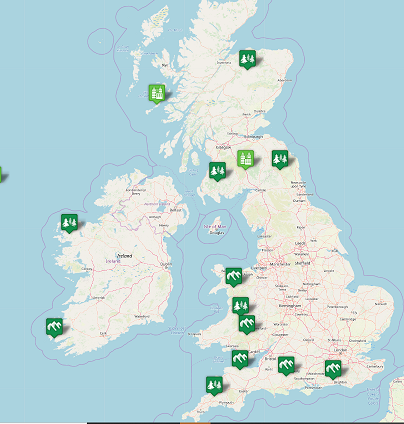 Dark Sky places in the UK and Ireland – map from www.darkysky.org

The Kielder Observatory https://kielderobservatory.org/ is located in the Northumberland Dark Sky Park and lies about 40 km (25 miles) north of a line drawn between the cities of Carlisle and Newcastle in northern England. It is in one of the least built up areas of England.

In densely populated England you are never too far away from a built up area. The closest large conurbation to Kielder is Tyneside centred on Newcastle, the edge of which is only 55 km (35 miles) away. So, in terms of darkness of it only rates as a 3 on the Bortle scale of how dark the night sky is but that’s about the darkest sky you can get in England. For comparison central Manchester, like most large cities, is Bortle scale 9. 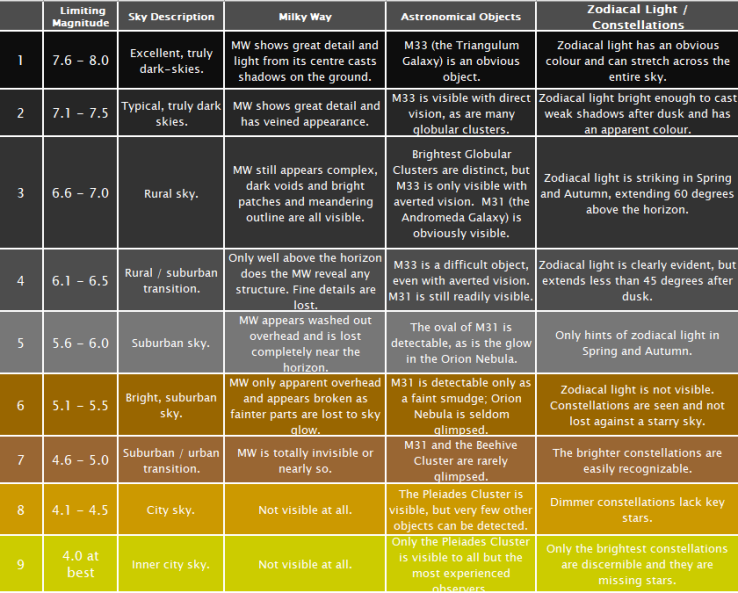 Astronmer John  Bortle designed this scale for amateur astronomers to the use the visibility of the Milky Way and other astronomical objects to assess how dark the sky is and give it a rating between 1 and 9.

Due to the high demand I booked our trip to Kielder Observatory months in advance. We planned to go in the middle of October on a night when there would be no Moon – making the night sky as dark as possible. In mid-October, the Sun sets at just after six o’clock, full darkness occurs about two hours later and evening temperatures in the early autumn are in general relatively mild. The image below, which has been created with the Stellarium software, shows what part of the sky should have looked like at Kielder – assuming of course that there were no clouds. Simulation from Stellarium of part of the sky  at 10 PM local time, 16  October 2015 –location Kielder Observatory, England (latitude 55.25 oN)

With the naked eye you could see thousands of stars, M31, the Andromeda galaxy which is our closest large galaxy. You could also see the planet Uranus and the asteroid Vesta. The Milky Way would be visible as a faint band of light. The picture also shows the radiants for two meteor showers, the Arietids and the Northern Taurids. These are the points in the sky where, to a viewer on the ground, meteor showers appear to originate from. In reality, 10:00 PM would be a bad time to attempt to see a meteor shower. They are more prolific after midnight.

If you run the same Stellarium simulation for Manchester city centre, because of the high level of light pollution, you can see the bright star Altair (in the constellation Aquila ‘The Eagle’) but very little else.

Simulation from Stellarium of part of the sky  at 10 PM local time, 16  October 2015 – location central Manchester, England (latitude 53.5 oN)

The observatory opened in 2008. The buildings are all  environmentally friendly and  made out of timber. Electric power is generated by a combination of wind turbines and solar panels. Before the current Covid-19 emergency, the observatory had visitor events almost every day of the year – shutting only for a short period over Christmas. A typical event starts at about 8 PM and lasts about three hours. There are a maximum of forty visitors on an event and it costs £30 (around $40) per head. After a brief tour of the observatory and a short talk, visitors are then free to go outside to view the heavens with their own equipment, equipment provided by the observatory or just the naked eye. Events are ‘themed’ in the sense that the talk beforehand is focused on a particular topic, such as the planet Mars if it happened to be well placed for observation. Although, after the introductory talk, people can go out and view whatever they want! It is also worth saying at this point that the observatory does not offer any refunds if on the evening you have attended it is cloudy and you have been unable to do any observing.

Typical Calendar of Events at Kielder Observatory -assuming of course that the current restrictions due to Covid-19 are removed.

One of the attractions of coming to Kielder in addition to the dark skies is that visitors don’t have to bring their own telescope. They are free to use any of the observatory’s telescopes. 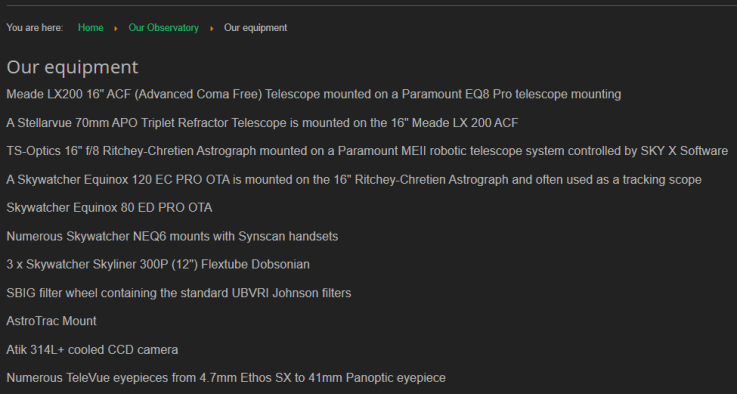 Many of the telescopes are much higher specification than the instruments owned by the vast majority of keen amateur astronomers. For instance, the 16-inch Meade telescope (first on the list above) has a retail price of around $25 000! The observatory is geared towards visitors viewing objects the traditional way by looking through a telescope eyepiece, rather than taking images on a digital camera and processing them later as most amateur astronomers who are more seriously into the hobby do nowadays.  So, anyone who wants to do any serious astrophotography would be advised to bring their own camera because Kielder only has one CCD camera available for the use of visitors.

My visit to Kielder

Unfortunately, our visit to Kielder wasn’t very successful. The day of the visit turned out to be a cloudy day.

Conditions during the day at Kielder

During  our entire three hours at the  observatory the sky remained covered in thick clouds. There was not a single star to be seen and there was clearly no point in getting the telescopes out.

So, you don’t just need a lack of light pollution – you also need clear skies, and the northern half of the UK is not renowned for its clear skies.  This is why professional astronomical observatories are situated on high mountains, to get well above the clouds!